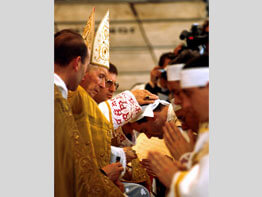 VATICAN CITY – In the long-standing conflict between the Vatican and the traditionalist Society of St. Pius X, Pope Benedict XVI has been a key figure in reconciliation efforts that, so far, have always fallen short.

When the pope lifted the excommunication of four of the society’s bishops in January, it finally seemed to open the way to the elusive “full communion” between the society’s leadership and the Catholic Church.

But the ending of this story has not yet been written, and even inside the Vatican there are questions about what the pope’s latest move really signifies for the short term and the long term.

One of the biggest short-term questions regards the standing of the Swiss-based society’s bishops and priests – specifically, whether in the Vatican’s view they remain suspended from their ministry until a more complete agreement is reached.

The answer, according to several Vatican sources, is that there’s no clear answer. The Vatican’s own experts had different interpretations of how canon law applies in this case. Some felt that the removal of excommunication for the four bishops implied removal of their suspension, but others disagreed.

Most at the Vatican hold that the priests of the Society of St. Pius X remain suspended from ministry until they are regularized, which presumably will happen in future talks between the Vatican and the society’s leaders. In the meantime, Masses celebrated by these priests are considered valid, even though illicitly celebrated; but other sacraments carried out by the suspended priests, like marriage and confession, are not valid, in the view of several canon law experts.

In a sense, the Vatican has decided to look past what one official called a “canonical mess” and focus instead on the overriding goal: how to reach full communion.

There were some hopeful signs. Vatican officials said Bishop Bernard Fellay, head of the society, had already begun “pacification” efforts among the society’s priests and seminarians in France and Germany to prepare them for re-entry into official unity with the universal church.

Bishop Fellay, they said, seemed to appreciate that Pope Benedict has built a bridge to the society by making two decisions that were not very popular among mainstream Catholics: lifting the excommunications and restoring wider use of the 1962 form of the Mass, known as the Tridentine rite.

But Vatican officials said much remains to be negotiated – “about a hundred details,” in the words of one source.

The Society of St. Pius X appears to be counting on Pope Benedict to make one more big concession: the granting of a special jurisdictional status to the society that would allow members to continue their traditional practices with some degree of autonomy.

The more problematic issues are not jurisdictional but doctrinal, and the elephant in the room is the Second Vatican Council.

The council was not mentioned in the official Vatican decree removing the excommunication or the accompanying statement. When he thanked the pope for his action, Bishop Fellay made a point of saying that the society accepts all the church councils “up to the Second Vatican Council, about which we express some reservations.”

In fact, the four bishops and many society members have at various times rejected Vatican II teachings on such matters as liturgy, ecumenism, interreligious dialogue and religious liberty, and blamed the council for the current “crisis” in the church.

“They’ll have to resolve that for sure,” said one Vatican official.

The only one to publicly mention Vatican II in connection with the future negotiations has been Pope Benedict. At his general audience Jan. 28, he said he hoped the society was ready to recognize the teaching and authority “of the pope and of the Second Vatican Council.” If the past is any guide, those will be tough talks.

Some Vatican sources said that while the excommunication removal is a major Vatican concession it also puts more pressure on the society to come to an agreement on full communion. For one thing, they said, the canon law ambiguities that are now being tolerated cannot be allowed to continue indefinitely.

Pope Benedict has been close to agreement with the society before. As Cardinal Joseph Ratzinger, at the request of Pope John Paul II, he conducted 11th-hour talks in 1988 with the late French Archbishop Marcel Lefebvre, the society’s founder.

Archbishop Lefebvre had been suspended from his ministry in 1976 after ordaining priests against Vatican orders and was threatening to ordain bishops – a move the Vatican said would result in schism and the automatic excommunication of those involved.