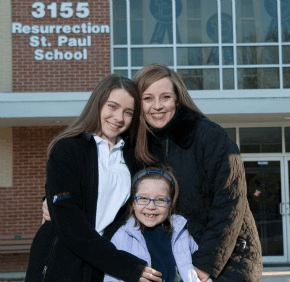 By Erik Zygmont ezygmont@CatholicReview.org Twitter @ReviewErik
“Solid academics” and “teachers that care”: Those are the standard and valid reasons non-Catholics send their children to Catholic schools, but they’re not the only reasons.

“I think it’s the academic excellence but also the values,” said Karen Murphy, principal of Resurrection-St. Paul School in Ellicott City, adding that “Catholic” can never be separated from those values.

“We don’t apologize for it, but we teach that Catholic is universal,” she said. “We teach the Catholic faith without making any kids feel left out.”

Catholics and non-Catholics alike appreciate Resurrection-St. Paul’s Values First program, according to Murphy, which integrates 13 values – hard work, concern for others and courage among them – across the curriculum.

Approximately 13 percent of the students enrolled at Resurrection-St. Paul are from non-Catholic families, Murphy said.

Among them is second-grader Amelia Fenton.

“We were looking for a school environment that pretty much matched and supported the beliefs and values we teach at home,” said her mother, Angela Fenton, adding that her family is Christian.

“(Resurrection-St. Paul School) has a very strong academic program, and at the same time they offer a very strong Catholic education,” Fenton added. “When it’s time for Mass or religion classes, they’re very welcome to everyone.”

Madelyn Ball, principal of The John Carroll School, also cited values, and even religion, specifically, as a pull-factor for non-Catholics, who comprise about 30 percent of her student body. Many of them are international students from overseas, including China, from where “they come with no religion,” she said.
“Many of their parents want them to learn about a religion because they can’t worship in their own country,” Ball said, noting that one Chinese student even converted to Catholicism after her exposure to the faith at John Carroll.
Specifically, the Catholic belief in eternal life resonated with the student, who had been close to her deceased grandmother, Ball explained.
“She started going to RCIA classes and was baptized,” Ball said. “Her parents came out to witness it, and they were so happy for her, even though they don’t believe what she believes.”
Clearly, various experiences and factors contribute to non-Catholics choosing Catholic schools. A recent study was commissioned by the Archdiocese of Baltimore to identify some of the common threads.
A big one is the tendency of Catholic school parents, Catholic or not themselves, to “be sensitive or more in tune to wanting to be involved in their child’s education,” said Michael Tinati, managing director of Kinetics Marketing and Communications, which surveyed 1,200 families and held focus group discussions.
“A lot of it is what we label as ‘safety,’” he continued, noting that a “safe and secure environment” was “number one, far and away,” of surveyed parents’ considerations when deciding on a school.
Tinati also noted how parents’ attitudes toward education have changed, from “You shut up and you listen, because I don’t want to hear from the principal about you stepping out of line,” to “I want access to teaching programs sensitive to my child’s style of learning.”
“It’s a little more touchy-feely today,” Tinati said.
When asked to choose an animal they identify with Catholic schools, many parents chose symbols of pride – a lion, hawk or elephant – but several also chose the kangaroo.
“It’s the concept of being able to carry a kid in a pouch and nurture them until they’re ready to go,” Tinati interpreted.
His study also confirmed the importance to values, which were related to “liberty.”
“There’s more freedom and liberty at Catholic schools to educate a child in light of character development and values than at public schools,” Tinati said.
One certainty, he added, was that once parents decide on a Catholic school, their children tend to remain there, barring “severe financial distress” or some other form of upheaval.
While parents do have to pay tuition at Catholic schools, Tinati added, they are “much better” positioned to provide a quality education that more people can afford than other private schools.
“At the end of the day, there are a lot of positives – a lot of really good things going on,” Tinati said.

School of the Incarnation celebrates 10 years of “Giving Back”