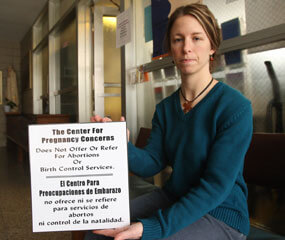 U.S. District Court Judge Marvin J. Garbis ruled Jan. 28 in Baltimore that it is unconstitutional to require pro-life pregnancy centers to post signs with language mandated by the government.

The ruling was a major victory for the Archdiocese of Baltimore, which had challenged a Baltimore City law passed in 2009 requiring the posting of signs at pro-life pregnancy centers stating that they do not provide abortion and birth control.

The archdiocese argued that such signs were a violation of First Amendment rights and that the law unfairly targeted pro-life pregnancy centers while no such signs were required of pro-choice centers indicating which services they don’t provide.

“The Court holds that the Ordinance violates the Freedom of Speech Clause of Article I of the Constitution of the United States and is unenforceable,” Judge Garbis wrote. “Whether a provider of pregnancy-related services is ‘pro-life’ or ‘pro-choice,’ it is for the provider – not the government – to decide when and how to discuss abortion and birth-control methods.”

Judge Garbis said the government cannot, consistent with the First Amendment, “require a ‘pro-life’ pregnancy-related service center to post a sign as would be required by the Ordinance.”

Archbishop Edwin F. O’Brien, who had actively campaigned against the law when it was being considered by the Baltimore City Council, called the ruling a “clear victory both for pregnant women in need of assistance and for First Amendment principles we treasure in a free society.”

In a written statement following the ruling, the archbishop said crisis pregnancy centers were an “integral part” of the archdiocese’s efforts to assist women looking for help carrying their babies to term.

“In Baltimore, these centers assist thousands of women every year who are trying to embrace the gift of life in their unborn children,” Archbishop O’Brien said. “And this ruling allows the important and compassionate work of these pro-life pregnancy centers to continue without interference from Baltimore City which sought to target these centers because they are pro-life.”

The archbishop added that “the ruling also upholds the constitutional rights under the First Amendment that protect private citizens such as those who work and volunteer in pregnancy centers from having to convey a government-mandated message.”

David W. Kinkopf, an attorney with Gallagher, Evelius and Jones who represented Archbishop O’Brien at an Aug. 4 hearing in Baltimore on the issue, said the ruling holds that because the city was regulating “core-protected speech” and not merely “commercial speech,” there was heightened scrutiny under the First Amendment.

“We think the judge got it right when he basically said there’s no place for the government to single specific speakers out for unfair speech regulation,” Kinkopf said. “The kind of speech these pregnancy centers are engaged in is not commercial speech – it’s deeply personal, moral and very important speech that deserves the full protection of the First Amendment.”

In arguing against the law in August, Kinkopf said that by highlighting what services are not provided at pro-life pregnancy centers, there is an implication that they are not equipped to help women. The signs imply that women can go elsewhere for abortions, Kinkopf said.

The plaintiff also pointed out that the signs inaccurately assert that pro-life pregnancy centers do not offer birth control when they do, in fact, offer information on abstinence and natural family planning.

Mark Rienzi, assistant professor of law at The Catholic University of America’s Columbus School of Law in Washington, D.C., said he hoped the ruling would have a “big impact” nationally in putting the brakes on similar legislation in other jurisdictions.

“Baltimore was the first place to pass one of these laws,” he said, “and a lot of places are modeling their laws based on Baltimore’s. I would hope seeing such a clear, thorough decision explaining why it’s unconstitutional would make people who are sworn to uphold the Constitution realize they are not allowed to do this.”

Carol Clews, executive director of the Greater Baltimore Center for Pregnancy Concerns, said she was “absolutely ecstatic” when she heard the ruling. The GBCPC operates a pregnancy center at St. Brigid Parish in East Baltimore, as well as one at St. Rita in Dundalk and another in Essex. It had joined with the archdiocese in the lawsuit.

“We are very grateful to God and to the archbishop and to all the people who gave so much time and effort doing pro bono legal work for us,” she said.

Clews posted the mandated signs Jan. 1, 2010 when the law took effect, but took them down within a month, after city officials said they would not enforce the law pending the outcome of the lawsuit. The ordinance would have imposed a $150 daily fine for pregnancy centers that do not post signs.

“They are not going to go quietly into the good night over this,” she said. “They are going to fight it tooth and nail.”