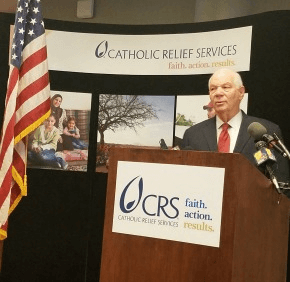 By Catholic News Service
WASHINGTON – Christians and all people in the Middle East need the solidarity of the U.S. Catholic Church, said the chairmen of three committees of the U.S. Conference of Catholic Bishops and the head of the Catholic Relief Services board.
“A concern for our Christian brethren is inclusive and does not exclude a concern for all the peoples of the region who suffer violence and persecution, both minorities and majorities, both Muslims and Christians,” said a Feb. 10 statement from four bishops.
“To focus attention on the plight of Christians and other minorities is not to ignore the suffering of others,” the statement said. “Rather, by focusing on the most vulnerable members of society, we strengthen the entire fabric of society to protect the rights of all.”
The group included Archbishop William E. Lori of Baltimore, chairman of the Ad Hoc Committee for Religious Liberty; Bishop Oscar Cantu of Las Cruces, New Mexico, chairman of the Committee on International Justice and Peace; Bishop Joe S. Vasquez of Austin, Texas, chairman of the Committee on Migration; and Bishop Gregory J. Mansour of the Eparchy of St. Maron of Brooklyn, New York, chairman of the board of Catholic Relief Services.
The group pointed to the findings of a recent USCCB delegation to Iraq, which confirmed that Christians, Yezidis, Shiite Muslims and other minorities had experienced genocide at the hands of the Islamic State group.
“It is important for Syrians and Iraqis of all faiths to recognize this as genocide, for that recognition is a way to help everyone come to grips with what is happening and to form future generations that will reject any ideology that leads to genocidal acts and other atrocities,” the bishops said in their statement.
The bishops called on Americans to accept “our nation’s fair share” of vulnerable families, regardless of religion and ethnicity, for resettlement as refugees. They called for special consideration of the victims of genocide and other violence.
They urged the U.S. to encourage the Iraqi government and the regional government in Irbil, Iraq, to “strengthen the rule of law based on equal citizenship and ensure the protection of all.”
U.S. aid should assist local and national efforts to improve policing and the court system and encourage local self-governance, the bishops said. Similar efforts are needed in Syria as well, they said.
The U.S. also can provide “generous” humanitarian and development assistance to refugees, displaced people and Iraqi and Syrian communities as they rebuild, the statement said. Such funding can be directed in part to “trusted faith-based nongovernmental agencies” such as Catholic Relief Services and local Caritas agencies, the bishops said.