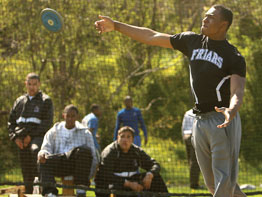 “Every day I coach is better than the day before,” said longtime head coach Gene Hoffman of his running and track programs at Archbishop Curley High School, Baltimore.

Coaching for more than 34 years and teaching for 31, Hoffman is a well-respected, knowledgeable coach and teacher.

His track and field teams are always competitive and well prepared as Hoffman has turned out top-level collegiate athletes and a dozen coaches over the years. He takes pride in his efforts.

In 2008, the Curley Friars are out to another solid start in the MIAA A Conference track and field season. Hoffman says he’s having a “good season” but out to a 3-0 start in conference competition would lead one to believe that the Friars are more than “good.”

With big wins over McDonogh, Calvert Hall College High School, Towson, and an ailing Loyola Blakefield, Towson, squad, the Friars have also nailed down a variety of Invitationals, including a recent first-place finish in the Loch Haven Bald Eagle Invitational in Pennsylvania. This gives the 2008 Friars victories in Delaware, Virginia and Pennsylvania. Curley is now ranked third in the Metro Prep poll behind Poly and Meade.

The Friars are led by junior Eric Franklin, a master of the high hurdles, sophomore George Chambers who excels in short and middle distance events and senior Jerome Junior, a field event superstar.

Curley’s team has an impressive set-up this season with more than 20 athletes scoring points for the team at both the dual meets and Invitationals. Hoffman carries 24 on his varsity and 26 on the junior varsity.

A big surprise for the team this year has been junior Terrance Dandridge who has been tearing it up on the relays and sprints.

In the throwing events, Hoffman has two athletes racking up the points, senior Chris Sonin and Chris Triplett. Sonin throws a powerful shot and Triplett throws the discus and the shot. Distance runners, Tim Skarda and Pat Hairfield have anchored the team’s running events as well.

Hoffman said, “It’s such a pleasure to take these athletes out of state. I take such pride in who they are and how they compete.”