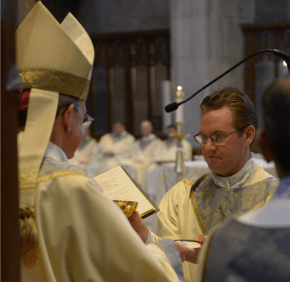 By Erik Zygmont
ezygmont@CatholicReview.org
Twitter: @ReviewErik
Many “how I became a priest” stories share a common element: A crisis of faith during late adolescence or early adulthood, followed by an overpowering resurgence – sudden or gradual – and, finally, a fervent desire to make the ultimate commitment to God.
Though the ending is the same, Michael Rubeling, a transitional deacon who will be ordained to the priesthood for the Archdiocese of Baltimore June 25 at 10 a.m. at the Cathedral of Mary Our Queen in Homeland, has a different story, with a mellower conflict.
“There was never a point in my life when I said, ‘I don’t want this,’ ” Deacon Rubeling said, looking back on his formative years in Frederick County, the first of 10 children born to Gary and Stephanie Rubeling, who have made faith the priority for their family.
“Some families are military families; others are into sports or academics,” the 27-year-old said. “Ours was centered around the church.”
So much so that Deacon Rubeling’s younger brother, Peter, is also in priestly formation for the archdiocese.
“We’re a happy family and a faithful family, and those two things go together,” he added. “For me, the question was, ‘Why wouldn’t I want this?’ ”
While faith was a constant, the certainty of the priesthood – even though he first felt the call at age 8 – was not.
After being homeschooled, he entered Frederick Community College, envisioning a future as a teacher.
“I was resisting,” he admitted, adding that he had been struggling between “two goods”: becoming a priest or having a faith-filled family, modeled after the one in which he grew up.
That January, however, he had an experience at an archdiocesan discernment retreat with Cardinal Edwin F. O’Brien, grandmaster of the Equestrian Order of the Holy Sepulcher of Jerusalem, then archbishop of Baltimore.
“It was the closest thing I have ever heard of to God audibly speaking to me,” Deacon Rubeling said.
The prompt was simple, direct and proximate – take the next step; enter priestly formation.
“It wasn’t even ‘Go, be a priest,’ ” recalled Deacon Rubeling, who still  struggled some. “I thought I would obey and then leave. The first couple of years were hard.”
It’s not easy now – Rubeling is currently in Rome working toward a licentiate of sacred theology at the Pontifical North American College – but he is where he wants to be.
“I’m loving it; it’s a challenge,” he said. “One big thing is just being in the heart of the church and near the Holy Father; it’s an incredible blessing.”
Deacon Rubeling has focused his studies on moral theology, including “how to communicate with a modern world that doesn’t seem to share the same thoughts or even the same language as the church.”
He reflected on a simple phrase: “Do good; avoid evil,” saying, “It’s about doing. We pursue something. We go to prayer; we’re disciplined about it, and in that we have to throw aside things that are holding us back. That’s a principle I’ve been thinking a lot about lately.”
Deacon Rubeling acknowledges many who impacted his vocation, including Monsignor John A. Dietzenbach, the former pastor at his home parish, St. Peter the Apostle in Libertytown.
“He loves people,” Monsignor Dietzenbach said of his former altar server and fixture – with the rest of the Rubelings – at daily Mass. “As one of the older kids in his family … he’s very comfortable leading, I think.”
Deacon Rubeling also expressed gratitude for the support of St. Peter’s current pastor, Father Jason Worley, during his time in the seminary.
As a high schooler, Deacon Rubeling went on several mission trips, including one to Kolkata, India, when he was 16, with Father John “Jack” Lombardi, pastor of St. Peter in Hancock and St. Patrick in Little Orleans (see page 30).
“It was a life-changing experience,” Deacon Rubeling remembered of his trip to the home of Blessed Teresa and her Missionaries of Charity. “Seeing this priest and other priests and sisters pray and serve was very striking to me.”
He observed that prayer has been a constant through his journey.
“A huge component is silence,” he said. “You have to be in a position where you can hear God, and you might have to reorganize your life in order to be able to do that.”
Deacon Rubeling added that he would like to request readers’ prayers.
Rubeling file
Age: 27
Home parish: St. Peter the Apostle, Libertytown
Education: Providence College, R.I.; Pontifical North American College, Rome
Served: St. Ignatius, Hickory