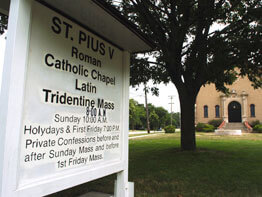 ROME – The head of the traditionalist Society of St. Pius X, Bishop Bernard Fellay, said the time is not right for reconciliation with the Vatican, despite expanded freedom to use the Tridentine rite.

The reason, Bishop Fellay said, is that the liturgical move has not been accompanied by other measures aimed at reversing the “crisis” introduced by the Second Vatican Council.

“Nothing has changed regarding Rome’s willingness to follow the council’s orientations, despite 40 years of crisis, despite the empty convents, the abandoned rectories, the empty churches,” Bishop Fellay said in a letter dated April 14 and published on the society’s Web site.

Bishop Fellay repeated the society’s frequent accusation that Vatican II introduced a mistaken vision of the church that is evident in the modern church’s relationship with the world, with other religions, and with states.

He said the society “rejoices” that Pope Benedict XVI has allowed wider use of the preconciliar Tridentine rite, but said resistance among bishops to the older rite has been “at times brutal.”

In any case, the bishop said, the idea that a single liturgical concession would lead the society to sign an agreement with the Vatican is “an illusion.”

“Without despairing, without impatience, we maintain that the time for an agreement has not yet come. That does not prevent us from continuing to hope and from continuing on the path defined in 2000,” he said.

The society and the Vatican opened on-again, off-again talks in 2000 aimed at reconciliation.

The society broke with the Vatican in 1988 when its founder, French Archbishop Marcel Lefebvre, ordained four bishops against papal instructions; Bishop Fellay was one of those ordained.

At that time, the Vatican said those involved in the ordinations were excommunicated. In his letter, Bishop Fellay said the society would continue to ask the pope to repeal the decree of excommunication “because we are persuaded that this would bring the greatest good to the church.”