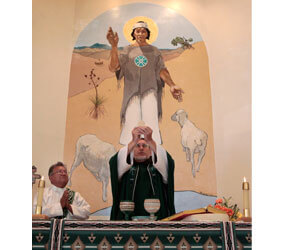 GALLUP, N.M. – To visit the Gallup Diocese is to fall in love with its vibrant culture, rich history and rugged beauty – rose-hued mesas, deserts of sagebrush and cactus, and forested mountains – but most of all with its people.

“You can’t help but fall in love, really you can’t,” said the bishop, who has headed the diocese since April 2009.

“It is the people and then everything else follows – the land, the atmosphere, the community, the environment,” he added.

The diocese straddles northwestern New Mexico and northeastern Arizona. It covers more than 55,000 square miles, serves close to 62,000 Catholics out of a total population of about 495,000, and is home to seven Native American tribes: Navajo, Zuni, Acoma, Laguna, Jicarilla Apache, Hopi and White Mountain Apache.

Native Americans make up the largest population group in the Gallup Diocese. The second largest is Hispanics. Anglos and Asians account for small percentages of the population. Generations ago Italian, Croatian and Czech immigrants arrived to work on the railroad and in the mines; Filipinos are among the most recent immigrants.

Native Americans in particular have “a real openness to the contemplative, meditative, prayerful life,” said the 47-year-old bishop, who was born in Ganado, Ariz., which is in the diocese, and was raised in Phoenix. “There’s this, I think, natural gift that opens them easier … to quiet themselves … to enter into prayer with God.”

“The devotion of all the Native Americans to their understanding of faith, spirituality and all was a great benefit to the early evangelizers who came into this area,” said Deacon Frank Chavez, who ministers at St. Mary’s Church in Farmington.

“There was already the sense of the spiritual, this sense of something greater than what’s inside of us” that the evangelizers were looking for and that the people “were already practicing,” the deacon told CNS. “They considered it part of their lifeblood. The spiritual wasn’t something separate, distinct from their everyday life, it was their life.”

The diocese was created by Pope Pius XII in 1939 “with the primary goal of ministering to the Native Americans,” according to Bishop Wall.

Its size means people, communities, churches and pastoral workers are far-flung. Many priests are responsible for two or three Catholic communities or more and travel long stretches to serve their flock.

The diocese has 38 diocesan priests (25 of whom are active), 17 religious-order priests, 110 women religious, 27 deacons, 55 lay missionaries and 483 catechists. Of its 52 parishes; 33 have a resident pastor and 18 have administrators (14 have a priest as administrator; three, a woman religious; and one, a deacon.)

The miles traveled by one priest on a recent weekend to celebrate Mass in three New Mexico communities illustrate this vastness. Father Matthew Keller, vocations director and head of a new diocesan mission resource office, covered 450 miles roundtrip from Gallup and back to fill in for the vacationing Father Jeff King, who takes care of that whole area every week.

Besides personnel and geography, economic factors also affect the work of the church and the lives of its people in this part of the country.

Gallup is one of 87 Catholic mission dioceses in the U.S. and is one of the poorest. It’s the very definition of “mission diocese” – having limited resources for funding both basic and essential pastoral works and ministries, and covering a vast territory served by small number of priests, religious sisters and other pastoral workers.

“There’s quite a bit of poverty, so it makes it difficult to do things you’d like to do,” Bishop Wall said.

The unemployment rate for Native Americans overall is 14 percent, compared to the U.S. rate of 9 percent. But it varies among reservations; on those in New Mexico, for example, unemployment hovers at 60 percent.

And the nation’s current recession is hitting the poor the hardest.

“The poorest are the last to come out of the economic downturn,” Bishop Wall said.

A bad economy in turn impacts the diocese. “When you’re relying on the generosity of people, different collections and that, those numbers might not be what they were in the past. It adds another bit of hardship,” he added.

A few parishes in the diocese can hold their own, and some have support from sister parishes around the country, but in other parishes “the collections aren’t even enough to pay for electricity,” the bishop said.

“We rely on the generosity of the Black and Indian Mission (Office), Extension. We have benefactors from outside the diocese. … Without it I don’t know what we would do.”

That funding “goes for everything, it’s not just one little specific thing, but it’s across the board,” he explained. It goes to schools and parishes. It pays for stipends for part-time and full-time clergy. It supports religious education programs and deacon and catechist formation.

As Bishop Wall noted, Gallup receives grants from the Washington-based Black and Indian Mission Office, which includes the Bureau of Catholic Indian Missions.

The mission office has special ties to the diocese through St. Katharine Drexel, a Philadelphia heiress who devoted her life and her inheritance to ministering to Native Americans and African-Americans. In the late 1890s and early 1900s, the founder of the Sisters of the Blessed Sacrament and a couple of her sisters visited the territory that is today the Gallup Diocese.

The diocese also receives grants from the Catholic Church Extension Society and the U.S. bishops’ Home Missions Collection as well as individual donations.

“Our diocese has many material and spiritual needs, but also has so much to give in the way of culture, history and faith,” Father Keller said.

Deacon Marcellino Morris, a Navajo who serves at St. Mary’s Church in Tohatchi, N.M., on the Navajo reservation, shares that view.

“Gallup is always portrayed as the poorest diocese in the nation, I guess, but we don’t feel poor,” he said. “Our being close to Mother Earth is something you can’t put a value on. I’ve come to realize that and most of the people, I am sure, share that sentiment.”

The Black and Indian Mission Office assisted CNS in setting up various interviews for this story. Information about the mission office is available at Blackandindianmission.org.