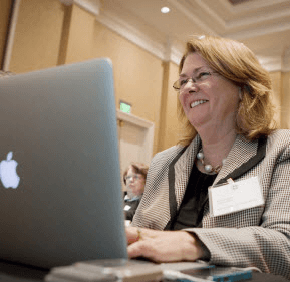 By Maureen Boyle
Catholic News Service
WASHINGTON – One of Mary’s titles is “Christ’s First Disciple,” and some of Christ’s earliest followers were women, two of whom he appeared to first after his resurrection.
Now, some 2,000 years later, another special group of women, specifically Catholic moms who blog on the Internet about their faith, the Catholic Church, as well as the joys and challenges of parenthood and everyday family life, can be considered among Christ’s newest evangelizers or “digital disciples.”
“Part of our vocation as mothers is to be within our home and do our work with love, and (as Catholic bloggers) we can also do work that draws people closer to Christ and his church,” said Lisa Hendey, a Catholic wife and mom blogger from Fresno, Calif.
In between carpool, dinner and homework duties, a growing number of Catholic moms have turned to Internet blogging as a newfound outlet to enrich their own Catholic faith, as well as the faith journeys of their regular readers, with whom they form a sort of spiritual camaraderie.
“We try to be supportive to parents in the trenches of the domestic church,” said Hendey, a mom of two sons ages 18 and 21. She also is the author of “A Book of Saints for Catholic Moms” and “The Handbook for Catholic Moms.”
Hendey said her 8-year-old blog, www.catholicmom.com, grew out of a website she launched in 2000.
Nowadays, she has about 150 regular contributors, mostly moms, a few dads – all volunteers – who are writing on various topics such as daily prayer, the church’s liturgical seasons, marriage, family finances, books and movies. Hendey stressed that although the blog’s content covers a multitude of Catholic-related subjects, all essays must be in accordance with church teaching and doctrine.
A blog is a website on which an individual or group of users record and share opinions and information on a regular basis. There are more than 150 million blogs on the Internet, with nearly 3,000 of them designated as Catholic blogs. There are no stats on the number of blogs operated by Catholic moms, but it is a growing “ministry” in this era of the new evangelization, said Hendey.
“It allows us to put information and thoughts out there and invite readers into dialogue,” she told the Catholic Standard, newspaper of the Washington Archdiocese.
“There are comments, more voices and a real sense of being a part of a community,” she said, describing the difference between a website and a blog. “You’re not just reading something. It’s much more interactive.”
Mary DeTurris Poust is a Catholic mom blogger from the Diocese of Albany, N.Y., whose blog, www.notstrictlyspiritual.com, began about five years ago as a sort of “spiritual journal online.”
A former Catholic journalist and currently a monthly columnist for Catholic New York, the newspaper of the New York Archdiocese, Poust said she started her blog as a way to write about things she couldn’t always cover as a Catholic reporter.
“It’s a blend of all areas of my life,” said Poust, a wife and mother to three kids – ages 16, 13 and 7.
When readers respond positively to one of Poust’s blogs, maybe one she based on a personal life struggle, she said, “It really affirms what I’m doing – using social media tools to reach people who aren’t necessarily in the pews or churches,” she said.
“They’ll email or comment and say they are going through the same thing and feeling alone on the journey,” said Poust, who also is the author of several books on the Catholic faith.
Rebecca Teti, a member of St. Jerome Parish in Hyattsville, Md., is the moderator of the blog Coffee Talk, which can be found at www.Catholicdigest.com and was launched more than one year ago.
It is an open forum for readers to discuss, ask a question, share a story or offer advice.
Daily topics include parenting, natural family planning, education, marriage or the different issues facing members of “sandwich generation” – those raising children and also caring for aging parents.
Readers are invited to “raise a question, tell a funny anecdote, share an interesting article, ask for advice or prayer,” with a few ground rules to keep in mind: “Keep it clean, keep it kind, and keep it ‘kosher.’”
An example of a recent Coffee Talk blog post came from a reader expressing her dismay over her 14-year-old son’s reluctance to receive the sacrament of confirmation. Several readers chimed in with suggestions about the importance of keeping the lines of communication open between parents and children, advice on the best catechetical resources, as well as promise of prayers for the woman and her son.
“Many Catholics don’t have the advantage of like-minded Catholics being nearby in their neighborhood who support and pray for each other,” Teti said, adding that the blog offers that notion in an online community. “The whole idea is to create the idea of girlfriends talking over coffee in a living room.”
Teti, a wife, a mom of four children ranging in ages from 9 to 16 and a Catholic convert, said there are downsides to the blogosphere, even among Catholics blogs.
She recommends setting strict limits on time spent online. “It can suck you in. Set objective limits of not spending more than one hour,” she said. “Real relationships can suffer.”
Her own faith, Teti said, has grown, through her work, which allows her to see how many Catholics take their faith seriously in a holy way. “It’s easy to believe you are isolated,” she said, noting that the Catholic blogs sites she’s visited give her a real sense “Catholicism is rich, lively and important, and that is heartening.”
Boyle writes for the Catholic Standard, newspaper of the Archdiocese of Washington.
Check out CatholicReview.org’s mom bloggers, Rita Buettner and Robyn Barberry.
Copyright (c) 2013 Catholic News Service/U.S. Conference of Catholic Bishops
PrevNext