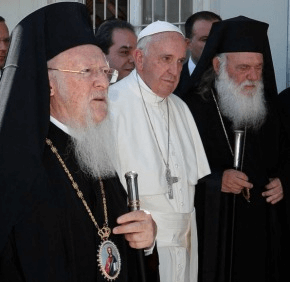 VATICAN CITY – Pope Francis will send high-level observers to the pan-Orthodox council meeting in Crete as a sign of respect, support and encouragement of the Orthodox Church.
The Holy and Great Council of the Orthodox Church was scheduled to open June 19, which is Pentecost on the Julian calendar, and run through June 26.
Ecumenical Patriarch Bartholomew of Constantinople invited Pope Francis to send observers to the meeting on the Greek island of Crete, and the pope chose Cardinal Kurt Koch and Bishop Brian Farrell, respectively the president and secretary of the Pontifical Council for Promoting Christian Unity.
Sending the Vatican’s top ecumenical officers demonstrates that “it is the Holy Father’s judgment that this is supremely important for the Orthodox, for our relationship with the Orthodox Church and, beyond that, it’s supremely important for the Christian witness in a world that is ever more confused about the role of religion,” Bishop Farrell told Catholic News Service June 8.
Council members – 24 bishops from each of the 14 autocephalous Orthodox churches – are scheduled to approve six documents, including statements on: the mission of the Orthodox Church in the contemporary world; the pastoral care of Orthodox living outside their church’s traditional homeland; how the autonomy of new Orthodox churches is determined; rules regarding marriage; the importance of fasting; and relations with other Christians.
Leaders of the Orthodox churches have been discussing hopes for such a meeting for almost 100 years. Planning meetings began in the 1960s, but even as the start date drew near, there were some fears that not all 14 self-governing Orthodox churches would send delegations.
The Orthodox Church of Bulgaria demanded June 1 that the meeting be postponed until a discussion could be held on its list of concerns, which included criticism of the how little the texts under consideration could be amended. The Bulgarians also objected to the invitation of observers from non-Orthodox churches and said they would not participate if the meeting went ahead as scheduled.
After the Antiochian Orthodox Church also asked for a delay and signaled a willingness to stay away from the meeting, a Russian Orthodox leader asked June 3 that a pre-council meeting be held by June 10 to work out some of the remaining concerns.
The Ecumenical Patriarchate, however, issued a statement June 6 saying the process already agreed upon by the heads of the 14 churches would not change and calling upon all 14 churches “to rise to the occasion and participate, on the pre-determined dates, in the sessions of the Holy and Great Council.”
The Catholic Church is hopeful that the council will take place, Bishop Farrell said.
“Every process that highlights and strengthens unity among Christ’s followers is in line with the Gospel and every process that does not bring about unity is a negation of the prayer of Jesus at the Last Supper” that his disciples be one, the bishop said. “It is hugely important for Christianity and, therefore, for the Catholic Church that the pan-Orthodox council be an effective sign of the unity of Orthodoxy.”
Bishop Farrell said the Orthodox decision to open the meeting on Pentecost is not simply symbolic, but is a spiritual affirmation that the meeting and its deliberations must be guided by the Holy Spirit.
Among all the churches and Christian communities the Catholic Church has formal relations with, the Orthodox are unique. The Catholic Church recognizes the Orthodox as a “sister church,” which has maintained apostolic succession of its bishops, a valid priesthood and sacraments. However, different Orthodox churches and, especially different sectors within those churches, do not always recognize the Catholic Church as a “sister church” with valid sacraments; the draft Orthodox document on relations with other Christian churches does not directly address the issue, but insists ecumenical dialogue is “imperative.”
“In the Catholic view,” Bishop Farrell said, “Orthodoxy is the Eastern part of the church and, as Pope John Paul often repeated, we long for the day that the church can breathe with both lungs” – East and West. The council could be “a big step in the right direction,” he said.
“We would like our presence to be a sign of our great support for the unity of the Orthodox Church,” he said, “and for their efforts to respond to the many challenges of living in today’s society and their intention to do that as a body rather than as separated into independent churches.”