St. Mary’s Seminary officially began on October 16, 1791. It was originally a three-story brick building called One Mile Tavern on what is now known as Pennsylvania Avenue. It was opened with Fr. Francis Charles Naget serving as both rector and superior of the Sulpician community. It was opened in hopes of producing clergy to assist the newly formed diocese in Baltimore. However, that was not the case. Of the five seminarians who began their education at St. Mary’s Seminary in 1791, only two were ordained. Of those two, one died shortly after his ordination, and the other returned to France three years later. In fact, by 1800, fourteen men had enrolled at St. Mary’s Seminary but only five had actually been ordained and the seminary was once again empty. 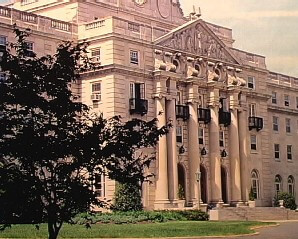 Over the next few years, the numbers started to grow very slowly. In 1808, St. Mary’s seminary had a total enrollment of 23 students. Two years later, John Mary Tessier took over as rector of the seminary and as superior to the American Sulpicians.

At Archbishop Maréchal’s request in 1822, St. Mary’s Seminary was raised to a pontifical university with the right to confer the degree of doctor of divinity. More than one hundred years later, when the Holy See, in effect, deprived St. Mary’s of her pontifical status, Archbishop Curley successfully fought to have it restored.

By 1865, the Archdiocese of Baltimore had 18 seminarians in formation at St. Mary’s Seminary. However, there were still many obstacles to overcome. Archbishop Spalding disliked the Sulpician administration at the seminary. He contacted the Sulpician Superior General in Paris, requesting that the professors of the seminary comprise individuals whose native language was English and who could understand and instruct according to the conditions in contemporary America. This request was denied.

This new building soon also grew too small. On November 18, 1928, the cornerstone was laid for the new St. Mary’s Seminary on an 80-acre lot located near Roland and Belvedere Avenues. The new St. Mary’s Seminary was dedicated a year later. After the dedication, the theologians moved to the new location, but the philosophers remained at Paca Street. The new chapel was constructed soon after. The cornerstone of the chapel was laid on November 11, 1941 as part of the sesquincentennial celebration of the Sulpicians in the United States.

In 1969 the seminarians studying philosophy on Paca Street were moved to St. Charles College and the Paca Street location was formally closed. The building on Paca Street stood empty for five years before demolished.

St. Mary’s Seminary is still located on Roland Avenue and holds the title of the oldest Catholic theologate in the United States. In addition to being a reknown seminary, St. Mary’s is also the locale for the Ecumenical Insitute of Theology.