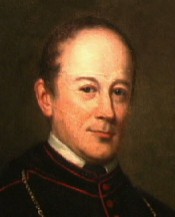 Samuel Eccleston was born on June 27, 1801 in Kent County, Maryland. His father, Samuel, was a Protestant Episcopal Clergyman. After the death of his father, his mother, Martha (Hyson) was remarried to a Catholic, Mr. Stenson. It was while Eccleston was a student at St. Mary’s College in Baltimore that he began the conversion process. He was received into the Catholic faith on May 29, 1819. After his conversion, he entered St. Mary’s Seminary and was ordained to the priesthood on April 24, 1825 by Archbishop Ambrose Maréchal. Later that year he joined the Society of St. Sulpice and was transferred to the Sulpician Seminary in Issy near Paris, France to continue his studies. Upon his return to the United States in 1827, he was appointed a member of the faculty and Vice President of St. Mary’s College. In 1829 he was named President, a position he held until 1834.

On March 4, 1834, Samuel Eccleston was appointed Coadjutor of Baltimore by Pope Gregory XVI. He received his episcopal ordination on October 19, 1834 by Archbishop James Whitfield at the Cathedral of the Assumption in Baltimore. He received the Sacred Pallium on November 1, 1835. At the age of 34, he is the youngest archbishop in the History of the Archdiocese of Baltimore.

Also in 1835 Archbishop Eccleston was named Apostolic Administrator of the Diocese of Richmond.

Archbishop Eccleston presided over the Third (1837), Fourth (1840), Fifth (1843), Sixth (1846) and Seventh (1849) Provincial Councils of Baltimore. It was during the Sixth Provincial Council of Baltimore that the twenty-three attending bishops declared that “The Blessed Virgin conceived without sin” was to be the Patroness of the United States.

Archbishop Eccleston endeavored to foster many relationships among different groups in the Archdiocese of Baltimore. He invited the exiled Pope Pius IX to preside over the Seventh Provincial Council of Baltimore in 1849. He also invited the Brothers of St. Patrick to staff the schools for boys. He invited the Redemptorist Fathers to help minister to the German Catholic of the archdiocese, and he invited the Lazarist Fathers and the Brothers of Christian Schools to minister to all Catholics in the archdiocese. Finally, he founded St. Charles Minor Seminary in Catonsville, an institution that led to the formation of many future bishops and archbishops of the Archdiocese of Baltimore.

On April 22, 1851 at the age of 49, Archbishop Eccleston died while at his Georgetown residence. In his 26 years serving the faithful of the church, he was spoken of very highly. He was a man of penetrating mind, enriched with a variety of learning opportunities. He was also a gifted preacher who displayed great zeal and piety in his work.

Source: The Encyclopedia of Catholic Bishops in America 1789-1989, Volume II.