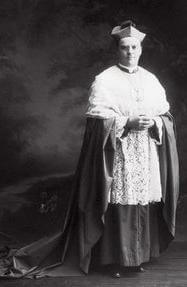 Motto: Quis ut Deus? “Who is like unto God?”

Michael Joseph Curley was born in Athlone, County Westmeath, Ireland, on October 12, 1879, the son of Michael Curley, a fairly prosperous farmer, and Maria Ward. He attended the Marist Brothers’ school in Athlone until age sixteen, then went to Mungret College, Limerick, conducted by the Jesuits, to study for the priesthood. Though he originally dreamed of being a missionary to the Fiji Islands, the visit of a bishop of Florida to Mungret led him to volunteer his services for that under-developed part of the Catholic world. After receiving a bachelor’s degree from the Royal University in Dublin, he entered the Urban College of the Propaganda in Rome in 1900 to prepare himself for the life of a missionary in the United States. He was ordained by Cardinal Pietro Respighi, vicar general of the pope, on March 19, 1904.

In Florida Curley was sent by the bishop of St. Augustine to a parish at DeLand that encompassed 7,200 square miles, greater by a thousand than the archdiocese he would later gov