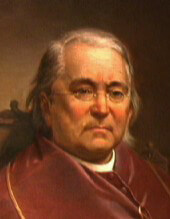 Martin John Spalding was born in rural Washington (later Marion) County, Kentucky, May 10, 1810, the son of Richard and Henrietta (Hamilton) Spalding, Maryland-born Catholics. He was educated at St. Mary’s College and St. Joseph’s Seminary in Kentucky before he was sent by Bishop Benedict Joseph Flaget of Bardstown to the Urban College of the Propaganda Fide in Rome to finish his theological studies. There he was ordained on August 13, 1834, after a brilliant defense of 356 theses for the degree of doctor of divinity.

In Kentucky he served as pastor of churches in Bardstown and Lexington and as president of St. Joseph’s College in Bardstown before he was appointed vicar general of the Diocese of Louisville in 1844. He was unhappy in his administrative roles largely because of a temperamental incompatibility with Bishop Guy Ignatius Chabrat, coadjutor to Bishop Flaget. On April 18, 1848, after Chabrat’s resignation, he himself was named coadjutor to Flaget and raised to the episcopacy September 10 by the old bishop, who immediately turned over to him the administration of the diocese. At Flaget’s death on February 11, 1850, Spalding became bishop of Louisville.

A voracious reader with a scholarly bent, Spalding began in 1834 an almost monthly essay or review of popular works for Catholic periodicals. As a priest he published D’Aubigné’s “History of the Reformation” Reviewed (1844), Sketches of the Early Catholic Missions of Kentucky (1844), and General Evidences of Catholicity (1847). As a bishop he produced Sketches of the Life, Times, and Character of the Rt. Rev. Benedict Joseph Flaget (1852), Miscellanea (1855), and a two-volume History of the Protestant Reformation (1860). At the same time he built a reputation as a preacher and lecturer. Particularly acclaimed were the series of lectures he delivered at Tremont Temple in Boston, Cooper Union in New York, and the Smithsonian Institution in Washington, D.C., in 1860. Excepting Orestes Brownson, he was the most influential American Catholic apologist in the antebellum period, his efforts being particularly attuned to American audiences.

Spalding was bishop of Louisville during the golden years of that city. One of his first achievements was the impressive cathedral still standing. A begging tour of Europe in 1852-53 won a number of exceptional priests and the Xaverian Brothers. The tour also led to the foundation of The American College of Louvain in 1857, of which Spalding was regarded the principal founder and patron. He began in earnest after his return in 1853 to create a parochial school system, recruiting still more religious orders to staff them. Particularly during his years in Louisville, he was one of the most outspoken champions of the Catholic school system and critics of the “godless” public schools.

A check on the swelling tide of Catholic immigrants to his see city, however, occurred in August 1855 with an outburst of nativist violence called “Bloody Monday,” whose severity Spalding sought to moderate. The Civil War also brought a halt to institutional growth. In the conflict Spalding sought to remain neutral, but the “Dissertation on the American Civil War” he composed for the enlightenment of his Roman superiors (published anonymously in the Osservatore Roman) made it clear that his sympathies were with the South. Such sympathies also caused him to denounce secretly to Rome his metropolitan, Archbishop John Baptist Purcell of Cincinnati, a staunch supporter of the Union.

A result of his Roman education, Spalding was one of the most proficient of the American bishops in canon law. He played a leading role at the First Plenary Council of Baltimore (1852) and at the three provincial councils of Cincinnati that followed (1855, 1858, 1861). A recognition of his talents as legislator, as well as his fame as an author, induced a majority of the American bishops to recommend him as a successor to his friend and mentor, Archbishop Francis Patrick Kenrick of Baltimore. To the oldest archdiocese he was translated on April 3, 1864, and installed on August 31. Though Spalding and others believed so, there had been no interference to his appointment on the part of the federal government.

Spalding immediately visited as much of the archdiocese as the Civil War permitted, taking careful note of its needs. He would establish more parishes and institutions per year and introduce more religious orders than any other archbishop of Baltimore. One of the institutions he founded was St. Mary’s Industrial School, a home for wayward boys, a work in which he pioneered. One of the orders he introduced was the Mill Hill Fathers, whose ministry was directed exclusively to African Americans. Through the two diocesan synods he held he would bring greater system and regularity to the oldest see.

It was, however, as leader of the Church in the United States that Martin Spalding sought to make his greatest contribution. Although the archbishops of Baltimore had served as conduits for the Holy See in matters touching the American Church as a whole, Spalding was the first to exercise an unblushing and vigorous leadership. His greatest contribution was the Second Plenary Council of Baltimore of 1866. For its convocation he had to overcome the reluctance of a number of bishops. In the troubled period following the Civil War, he argued, a display of unity was necessary. “Four million of these unfortunates are thrown on our Charity,” he told the archbishop of New York, referring to the emancipated slaves, “and they silently but eloquently appeal to us for help.”

The 534 decrees of the council constituted a corpus juris for an immigrant Church that was rapidly achieving definition, providing as it did a distinctly American statement of doctrine and of discipline in such areas as diocesan organization, sacraments, worship, pious associations, and Catholic publications. No other council was so much the work of one man.  Though its work would be overshadowed by the Third Plenary Council of 1884, the latter could never have accomplished what it did had not Spalding broken the pattern of piecemeal legislation and modeled the procedures it would follow. Much that Spalding was compelled to leave as exhortation the Third Plenary Council would mandate. The three great goals that Spalding had set the council in 1866 but failed to achieve–a uniform catechism, a Catholic university, and a process for addressing the needs of African Americans–would be realized in 1884. His attempt to do more in 1866 was to a degree thwarted by Episcopal timidity and in at least one case, that of Archbishop Peter Richard Kenrick of St. Louis, outright hostility.

Another of Spalding’s signal contributions, but one seldom recognized by historians, was his prevention of the condemnation of workingmen’s unions by both the American hierarchy and the Holy See at a critical juncture of the labor movement. At the Second Plenary Council he succeeded in having the bishops exempt labor unions from a blanket condemnation of secret societies. When asked by Rome his opinion on such unions, Spalding observed that in commercial countries capital was a “despotic ruler” and the worker its slave. “This being the case, I say, leave the poor workers alone.” He advised that the Church elsewhere follow the example of the Second Plenary Council.

Spalding took the lead in an unsuccessful attempt to prevent a Roman condemnation of the militant Irish and American Fenians but a successful one to prevent the formation of an American Battalion to fight for the Papal States. Initially sympathetic to many of the priests who complained against their bishops, Spalding set himself against a movement for priests’ rights when informed of the radical views of some of the leaders, especially in New York, and rebuked those in Chicago when asked by Rome to investigate affairs in that diocese.

In Baltimore Spalding was not able to write as much as in Kentucky but did revise some of his earlier works and dashed off occasional pieces for the Catholic Publication Society and the Ave Maria. When the Syllabus of Errors with its apparent condemnation of such American principles as freedom of worship and separation of Church and state reached the United States in 1865, Spalding took it upon himself to issue a pastoral letter assuring Americans in general that the condemnations were not intended to extend to the United States. His attempt to extract a statement to this effect from the Roman authorities, however, was unavailing.

Fearful that the Vatican Council called for in 1869 would attempt to legislate such condemnations, Spalding urged upon the preparatory commission the avoidance of any reprobation of the Church-state arrangement of countries like the United States. He also urged an implicit rather than explicit definition of papal infallibility. At the council itself Spalding attempted, unsuccessfully, to create a compromise party that favored an implicit definition. Drawn into a dispute with Bishop Félix Dupanloup of Orléans, who had the support of Archbishops Kenrick and Purcell and a small number of other American, Spalding came out in favor of an explicit definition of papal infallibility in which the concurrence of the bishops would not be required, a retreat from his earlier position. In a pastoral letter he wrote before leaving Rome, he explained that such a definition was necessary in order to eradicate forever the revived Gallicanism that his opponents clearly represented. At the prorogation of the council, Spalding worked, unsuccessfully, with Cardinal Henry Manning of Westminster and Archbishop Victor Deschamps of Malines, for a resumption of the council in the latter city. Upon his return to Baltimore and on the occasion of the twenty-fifth anniversary of the coronation of Pius IX, Spalding staged two of the most impressive demonstrations of papal support in the Catholic World.

Spalding’s last year was troubled not only by illness (he had suffered severe attacks of gastritis throughout his life) but also by an acrimonious dispute with Bishop William McCloskey of Louisville, in which he sided with those in his former see who complained to Rome of their new bishop. McCloskey, however, had the support of his metropolitan, Archbishop Purcell. Spalding died on February 7, 1872, of bronchitis, and was buried in the crypt of the cathedral in Baltimore.

Spalding was a popular bishop both in Louisville and Baltimore but was strict in such matters as dress, dancing, theater-going, mixed marriages, and abortion. He had an amazing capacity for work, a driving energy that contributed to his death three years before he would have received the reward he undoubtedly sought, that of being the first American to wear the red hat. Few, if any, American prelates surpassed Spalding in his range of interests and activities, whether as organizer, administrator, legislator, apologist, author, orator, or scholar. Perhaps to a great degree than any other bishop at mid-century, John Hughes not excepted, he contributed to the shaping of the immigrant Church by articulating its attitudes, breathing life into its institutions, and systematizing its discipline. Though old-stock in birth and breeding, he came to identify with the immigrant poor. Ambitious, and possessed of a touch of vanity, he was, nevertheless, a caring bishop, his principal efforts being directed, as his nephew-biographer noted “to the orphan, to the negro, to the sinful, to the outcast, to the aged, to all who suffered and had none to pity them.”

Crews, Clyde F. An American Holy Land: A History of the Archdiocese of Louisville. Wilmington, Del., 1987.