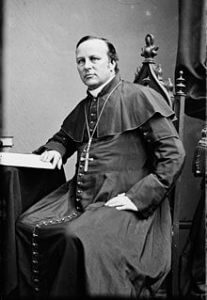 Eighth Archbishop of Baltimore, 1872-1877; born August 23, 1814, Harlem, New York, the son of Guy Carleton Bayley and Grace Roosevelt Bayley. Baptized and raised in the Protestant Episcopal Church, Abp. Bayley was descended from some of New York’s most prominent families and had a privileged upbringing. He attended Mount Pleasant Classical Institution, Amherst College, and Trinity College, receiving his B.A. degree in 1835. After studying medicine for one year, he withdrew from the program to begin preparing for the Episcopal priesthood with the noted Rev. Samuel Farmar Jarvis in Middletown, Connecticut. He was ordained in 1839 and returned to his family’s home parish of St. Andrew in Harlem for his first assignment. Bayley’s work with the poor in his community, many of who were Irish immigrants, and the friendships he formed with neighboring Catholic pastors, led to his being increasingly drawn to Catholicism. Over the next three years, he read and prayed his way into the Catholic Church, receiving instruction from the future Cardinal Archbishop of New York, Fr. John McCloskey. He also received counsel from his first cousins, the children of his father’s stepsister, St. Elizabeth Ann Bayley Seton, foundress of the Sisters of Charity of St. Joseph, to whom he remained close throughout his life.

In 1841, Bayley traveled to Rome, Italy, where he made the decision to convert and was formally received into the Catholic Church on April 28, 1842 at the Church of the Gesù. He entered the Sulpician Seminary at Paris soon after and completed his training at St. John’s in New York. He was ordained for the Diocese of New York on March 2, 1844 by Bp. John J. Hughes. His early assignments included serving on the faculty of St. John’s College (later Fordham) and as secretary to Abp. Hughes. In 1852 he attended the First Plenary Council of Baltimore, where, at the request of the bishops in attendance, the city of Newark, New Jersey, was designated as the seat of a new diocese. Fr. Bayley was recommended for the see and on October 30, 1853 he was consecrated the first bishop of Newark. At that time, the boundaries for the diocese encompassed the entire state of New Jersey. There were an estimated 40,000 Catholics and thirty-three parishes in the diocese with nine women religious and thirty priests to serve them. Bayley immediately laid out an ambitious plan that would focus on the building of churches and schools. To carry out this work, he recruited religious orders, seminarians, and priests to serve with him.

Within ten years the Sisters of Charity of St. Elizabeth had been established as a diocesan order, Seton Hall College, named for his aunt, St. Elizabeth Ann Bayley Seton, and Immaculate Conception Seminary had been founded. As Bishop of Newark, he attended the Second Plenary Council of Baltimore in 1866 and the First Vatican Council in Rome, 1869-1870. When he received news of his appointment to the Premier See in 1872, Bayley had been bishop of Newark for nineteen years. During that time, the Catholic population in New Jersey had increased more than four-fold with the number of parishes keeping pace. There were 170 priests and 18 religious orders present in the diocese with the infrastructure for a network of Catholic education, healthcare, and social service programs firmly in place.

Bayley was installed as the eighth Archbishop of Baltimore at the Cathedral of the Assumption of the Blessed Virgin Mary on October 13, 1872. The Sacred Pallium was conferred on him the same day. Diagnosed with Bright’s disease, health problems prevented Abp. Bayley from playing an active role in the affairs of his new see. He is credited with implementing administrative reforms that helped the Archdiocese run more efficiently, including the requirement that pastors submit annual parish reports, and for encouraging the founding of lay devotional, charitable, fraternal, and temperance societies, all of which flourished during these years. He led a capital campaign to retire the cathedral’s debt and on May 25, 1876, officiated over the consecration of the nation’s first Roman Catholic Cathedral. With his health continuing to fail, he requested in 1877 the appointment of a coadjutor bishop to assist him in his work. Baltimore-born Bp. James Gibbons was transferred from the Diocese of Richmond to Baltimore at this time and would succeed Bayley within the year. Realizing that the end of his life was near, Bayley returned to his beloved Newark, where he died on October 3, 1877. At his request, he was buried in Emmitsburg near his aunt, St. Elizabeth Ann Bayley Seton.

Throughout his priestly ministry, Bayley was an active supporter of the temperance movement, a champion of Catholic schools, and an advocate for the poor and marginalized. He had a national reputation and was noted for his keen intellect, impeccable manners, and imposing presence. Possessing a strong sense of history, he collected historical data and organized the Episcopal archives for New York, Newark and Baltimore. He also authored two books: A Brief Sketch of the Early History of the Catholic Church on the Island of New York (1853) and the Memoirs of Simon Gabriel Brute, First Bishop of Vincennes (1855) and encouraged the work of others.