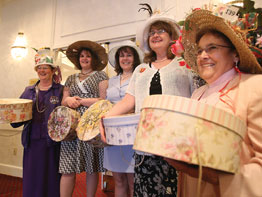 In an effort to support future leaders, The Catholic Daughters of the Americas provides scholarships for Catholic elementary students entering Catholic high schools. On April 6, the Maryland Court Catholic Daughters of the Americas sponsored “Tea by the Sea” at the Marriott-Annapolis Waterfront Hotel. The third annual tea benefited the Father Henry Hughes Scholarship Fund and was hosted by Court Annapolis, which recently celebrated its 90th anniversary.

Some 200 members and guests from all corners of Maryland were dressed in their “Sunday attire,” donning creative hats for a special competition, according to Marie Kimmey, who handles state public relations for the Catholic Daughters.

Guest speaker Ginger Doyle, an author and book illustrator, talked about the history of Annapolis. Her newest book, “Over the Bridge,” will be out late this summer.

First-place finishers in the hat competition were: