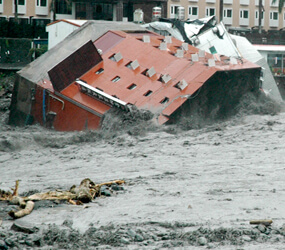 WASHINGTON – Catholic bishops in Taiwan asked their people to pray for the victims of Typhoon Morakot, which dumped more than 80 inches of rain on the island the second weekend in August.

Catholics and others in disaster-stricken areas were helping victims with food and shelter, and the Chinese Regional Bishops’ Conference in Taiwan planned further action, Father Otfriend Chan, secretary-general of the conference, wrote in an e-mail to Catholic News Service.

Father Chan said Caritas and the Taiwan Catholic Mission Foundation, two local Catholic organizations, were collecting donations. He said the bishops made an official appeal in the local Catholic newspaper, asking people to pray for the victims and their families by holding vigils or attending Mass.

Morakot left 21 people dead in the Philippines, then moved on to Taiwan and eastern China. A mudslide in a Taiwanese mountain village may have buried up to 600 people, according to The Associated Press.

The two storms displaced nearly 9 million people, and hundreds were feared dead, according to news reports.

Catholic officials in mainland China and Japan could not immediately be reached for comment.