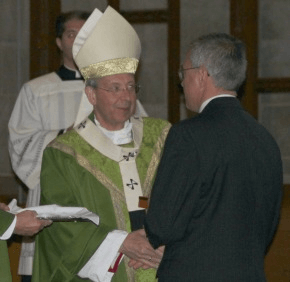 After his wife died unexpectantly last year just shy of her 58th birthday, Maryland Congressman Andy Harris was moved by the many stories people shared with him about how Sylvia “Cookie” Harris had supported the pro-life cause.

Cookie Harris had served publicly as a member of the archdiocesan Respect Life Committee, a member of the board of directors of Pregnancy Center North, director of special events for Maryland Right to Life and as a volunteer with the Gabriel Network and other organizations.

“It meant so much to her that she made time for it all,” Harris told the Catholic Review. “I’m amazed at how much she got done. She was doing things that wouldn’t even be obvious to us. It was her passion.”

Archbishop William E. Lori honored Cookie Harris by presenting the archdiocesan Culture of Life Medal to her posthumously during the Oct. 4 Respect Life Mass at the Cathedral of Mary Our Queen in Homeland. Andy Harris accepted the recognition on behalf of his family.

During the presentation, Linda Brenegan, respect life program director for the Archdiocese of Baltimore, called Cookie Harris a “woman of deep faith.”

“Her Catholic faith and love for the Lord translated into a loving respect for all human life,” Brenegan said.

In his homily, Archbishop Lori called respect for human dignity the “foundational principle” of the church’s moral and social teachings. Every life at every stage has value, he said.

“This should be a cornerstone of a society that is just and merciful,” Archbishop Lori said.

Archbishop Lori said families flourish through “thousands of acts of human kindness.” As an example, he recounted how his parents lovingly cared for his older brother, Frankie, who is developmentally disabled.

When the church’s teachings on the dignity of every life are seen through the lens of family love, the archbishop said, they “are not harsh, but merciful.”

During the Respect Life Mass, 13 Catholic schools were represented, along with Maryland Catholic homeschoolers and the respect life groups from four local universities.

Cookie Harris, a native of Puerto Rico who had been a parishioner of St. Joseph in Cockeysville and a former teacher in the parish school, was on the minds of many at a reception that followed the liturgy.

“She loved her family, she loved God and she loved the country,” said Maureen Stansell, active in pro-life outreach at St. Andrew by the Bay in Annapolis and with the archdiocese. “She was always self-giving and always smiling.”

Andy Harris, a parishioner of Christ the King in Towson, said he intends to honor his wife’s legacy by working to enact pro-life legislation in Congress. He has been a leading advocate of stripping federal funding for Planned Parenthood. Recent undercover videos showing Planned Parenthood officials discussing the sale of fetal tissue is helping shift perspectives about the organization in the wider public, he said.

“The idea is slowly being appreciated by people that Planned Parenthood is not about healthcare for women,” he said. “It’s really about abortion and its darkest side is the selling of baby body parts.”

The congressman said his wife showed that everyone can make a difference in the defense of life.

“She was an excellent example to anyone who believes in life and who believes they can play a role,” he said.