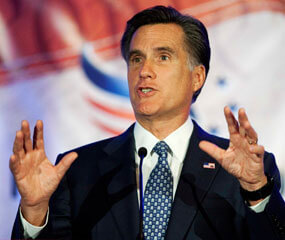 WASHINGTON – Negative opinions about his Mormon faith could hurt former Massachusetts Gov. Mitt Romney’s chances of receiving the Republican nomination for president, but are not likely to impact the presidential race if he gets the nomination, according to recent polling.

A survey released Nov. 23 by the Pew Research Center for the People & the Press and the Pew Forum on Religion & Public Life showed that views on Romney’s membership in the Church of Jesus Christ of Latter-day Saints have not changed much since he first ran for president in 2007. Just more than half of those surveyed said Mormonism was a Christian religion in both 2007 and 2011.

Cain was the second choice for white Catholics, with 23 percent, while former Speaker of the House Newt Gingrich was third, with 19 percent. The second most popular candidate among white evangelical Protestants was Gingrich, with 19 percent.

Compared to a month ago, Gingrich’s support among all Republicans and Republican-leaning voters had doubled from 8 percent to 16 percent, while support for Texas Gov. Rick Perry declined by a similar margin, from 17 percent to 8 percent.

But when the survey asked all registered voters about their support for various Republican candidates against President Barack Obama, a Democrat, Romney (47 percent) was within 2 percentage points of Obama (49 percent). Gingrich, Cain and Perry were projected to lose to Obama by a margin of at least 11 percentage points.

Among voters who attend religious services at least once a week, Romney was favored over Obama by a margin of 55 percent to 41 percent.

The survey also looked at how Americans viewed the major political parties in terms of their friendliness to religion, with larger numbers seeing the Republican Party as friendly to religion than the Democratic Party.

The numbers were nearly identical to the national averages for white Catholics. But 45 percent of black Protestants said the Democratic Party is friendly to religion, while only 23 percent said the Republican Party was.