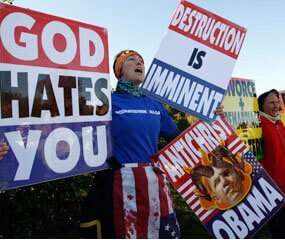 WASHINGTON –The First Amendment right to free speech trumps the rights of a deceased Marine’s family to be protected from emotional distress intentionally inflicted by extreme and outrageous protests outside his funeral, the Supreme Court ruled March 2.

In a narrowly applicable 8-1 decision, the court upheld a 4th U.S. Circuit Court of Appeals ruling that the members of the Westboro Baptist Church of Topeka, Kan., were within their First Amendment rights when they staged a protest outside the 2006 funeral of Matthew Snyder at St. John Parish in Westminster.

His father, Albert Snyder of York, Pa., sought financial compensation for emotional distress, defamation and other injuries after he learned about the Westboro group’s protest.

The members of the small church, which consists of the Rev. Fred W. Phelps and his family, have made a practice of staging protests at the funerals of soldiers and at other public places with signs such as “God Hates the USA,” “God Hates Fags” and “Thank God for Dead Soldiers.”

Rev. Phelps teaches that the deaths of soldiers are God’s vengeance on the United States for society’s tolerance of homosexuality. The Catholic Church is a frequent target as well, with protesters’ signs about pedophiles.

But in writing for the court, Chief Justice John Roberts said the Westboro members had a constitutional right to be where they were and to say what they did, despite the objectionable nature of what they were doing.

“Westboro believes that America is morally flawed; many Americans might feel the same about Westboro,” Roberts wrote.

Westboro’s funeral picketing is certainly hurtful and its contribution to public discourse may be negligible,” he continued. “But Westboro addressed matters of public import on public property, in a peaceful manner, in full compliance with the guidance of local officials. The speech was indeed planned to coincide with Matthew Snyder’s funeral, but did not itself disrupt that funeral, and Westboro’s choice to conduct its picketing at that time and place did not alter the nature of its speech.”

Making clear that the ruling was intended to apply narrowly, to the particular facts before the court, Roberts concluded that “speech is powerful. It can stir people to action, move them to tears of both joy and sorrow, and – as it did here – inflict great pain. On the facts before us, we cannot react to that pain by punishing the speaker.

“As a nation we have chosen a different course – to protect even hurtful speech on public issues to ensure that we do not stifle public debate. That choice requires that we shield Westboro from tort liability for its picketing in this case.”

Justice Samuel Alito, the lone dissenter on the court wrote a strong rebuttal, arguing that the breadth of rights under the First Amendment does not include intentionally inflicting severe emotional injury “by launching vicious verbal attacks that make no contribution to public debate.”

“In order to have a society in which public issues can be openly and vigorously debated, it is not necessary to allow the brutalization of innocent victims like the petitioner,” Alito wrote.

Roberts and Alito noted that the Westboro members target their protests less at individuals than at events where they are likely to garner the maximum public attention for their views.

As Alito noted, they threatened to protest at the Catholic funerals in January of Christina Taylor Green and Judge John Roll, two of the six victims of the shopping center shooter in Tucson, Ariz. They backed down when radio stations offered to give them free airtime to explain their beliefs.