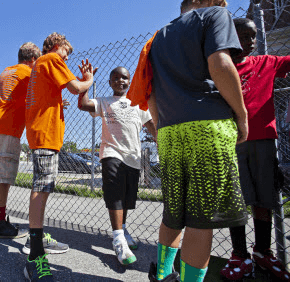 By Maria Wiering
mwiering@CatholicReview.org
Twitter: @ReviewWiering
ANNAPOLIS – More than 100 tweens and teens poured through the doors of St. Andrew by the Bay June 15 for the opening session of a weeklong day camp. In the flurry of first-day activity, its name, Summer Madness, seemed especially fitting.
St. Andrew by the Bay, Annapolis, is one of several parishes in the Archdiocese of Baltimore that host the weeklong summer program for middle-school students. Although there is no central curriculum, Summer Madness’ structure is similar across many parishes: community service in the morning with fun in the afternoon, bookended by prayer and reflection.
In addition to middle-school-age students, the camp draws high school students who act as peer ministers and lead program activities. The older students have an opportunity to develop leadership skills and provide a “cool factor,” said Lisa Franceschini, youth ministry coordinator at the parish.
Some parishes, including St. Andrew, have offered the camp for decades.
It used to collaborate with other Anne Arundel County parishes for Summer Madness, but the parish launched its own program last year. The joint program capped the number of participants and leaders a parish could send, and Franceschini didn’t like to turn kids away.
Last year, St. Andrew’s program drew 80 participants – 45 campers and 35 peer ministers. It attracted 107 this year – 73 campers and 34 peer ministers.
“I felt that if we could really run an excellent program, the spirit and energy of those kids would carry into the fall,” she said.
She was right.
In just a year, St. Andrew’s Summer Madness program has boosted youth involvement beyond Franceschini’s expectations. About 80 high school students now participate in the parish’s youth council, with 60 regularly attending meetings.
Enthusiasm for the high school youth group keeps students involved in the parish beyond sophomore-year confirmation, she said. Middle school students also initiated a youth group, and work alongside high school students at parish events.
Father Jeffrey S. Dauses, St. Andrew’s pastor, also sees Summer Madness as an energizing force among his parish’s young people.
“It gives them a sense of meaning and purpose,” he said. “They really feel part of the parish, because they’re doing something, not just having something done for them.”
Shanon Quetel, whose 14-year-old son, Dylan, was in the program this year and whose daughter has participated in the past, said Summer Madness has taught her children compassion through its emphasis on serving others.
“They’ve touched a lot of people’s lives,” she said. “They get a lot of out of it.”
Summer Madness’ service component is 13-year-old Casey Baum’s favorite part, he said, before jumping into a vigorous kickball game with kids from Glen Burnie’s Salvation Army Boys and Girls Club.
“I’ve learned there are tons of places that need help, and one person can make a huge difference,” he said.
For Franceschini, it was critical for St. Andrew’s Summer Madness to prioritize prayer and Scripture reflection throughout the day.
“The No. 1 goal is to allow the middle-schoolers to experience Christ actively working in their lives – like a real experience, almost tangible,” Franceschini said.
That can happen through the relationships they form, she said, both with each other and the people they serve.
“By the end, the makeup is gone, the barriers are down, and everyone has learned to respect and love one another and be together despite our differences,” she said. “The overarching goal is not just to introduce them to service, but also to help them understand why.”
PrevNext