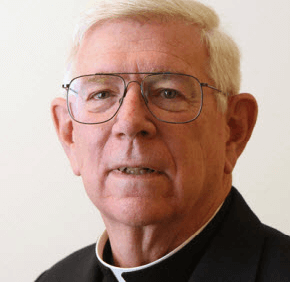 A Mass of Resurrection was offered June 23 at Our Lady of the Angels, followed by a burial in a Sulpician cemetery, both in Catonsville.

Sulpician Father Thomas R. Hurst, president rector and vice chancellor of ecclesiastical theological faculty at St. Mary’s Seminary and University who has known Father Lardner for 42 years, was the homilist.

A native Baltimorean, Father Lardner attended St. Agnes School in Catonsville and at age 13 he entered St. Charles Seminary. He was ordained an archdiocesan priest in 1967.

When Father Lardner was a youth, his uncle was the Sulpician Provincial at St. Mary’s. Father Hurst called Father Lardner’s uncle “a great example.”

Father Lardner earned a bachelor’s degree in philosophy from St. Mary’s Seminary and University in 1963.

He also earned degrees in theology and philosophy from St. Mary’s Seminary and University, a master’s degree in liturgy from the University of Notre Dame in South Bend, Ind. and a doctorate in communion from Temple University in Philadelphia.

“I had an experience of him there as a dedicated high school teacher,” said Father Hurst, who met Father Lardner at St. Joseph’s in 1970 as a seminarian during his pastoral year.

“This is a man of great energy, dedication,” Father Hurst said. “He had a strong, forceful personality, deeply committed to people learning, learning about God and learning about God’s presence in their lives.”

Father Hurst called Farther Lardner “a superb homilist” who “got your attention right away.”

Sulpician Father Thomas R. Ulshafer, Sulpician Provincial at St. Mary’s Seminary and University who met Father Lardner at St. Charles Seminary, said he “put a great deal of emphasis in the homily because that was his training. His preaching was very important.”

“It’s not that he necessarily preached long,” Father Ulshafer said, “but he knew what he wanted to say.”

After five years as the associate pastor of St. John Vianney in Seattle, Wash., Father Lardner was the hall rector and adjunct assistant professor at the University of Notre Dame and in London, England from 1982 to 1995.

From 1995 to 2002, Father Lardner was a faculty member of the Emmaus Spirituality Centre in Zambia, Africa.

“That was part of his desire, to be able to go help in a church where they had very limited resources,” Father Ulshafer said.

In 2002 Father Lardner retired to St. Charles Villa in Baltimore and in 2006 moved to a second residence where he lived until his death.

In his retirement, Father Lardner tutored University of Maryland graduate students and took courses at the Maryland Institute College of Art in Bolton Hill.

Father Lardner had an “inquisitive mind,” Father Ulshafer said. “He was always curious about many things and read a great deal. He was open to learning new things.”