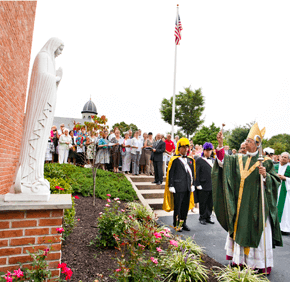 ELKRIDGE – The memories of three high school seniors and their teacher, as well as their recently closed high school, were honored Aug. 19 as a statue to the Blessed Virgin Mary was rededicated at St. Augustine in Elkridge.

Archbishop William E. Lori of Baltimore celebrated Mass at the parish before leading a procession with St. Augustine’s pastor Father John Williamson from the church to St. Augustine School, where he dedicated a four-foot-tall, white stone statue with prayer and holy water.

The statue was first dedicated in 1969 to three seniors and their teacher at then Cardinal Gibbons High School in Catonsville who had died in a small-engine plane accident the year before. The three youths were members of St. Augustine parish and had attended its grade school.

The statue had been part of a grotto at Cardinal Gibbons School, which closed two years ago.

Bringing the statue to St. Augustine was like bringing it home, said Charlotte “Sis” Slavotinek, whose son Michael was among the friends who died May 15, 1968, shortly before their graduation.

Paul DeMinnis, Mark Mitchell and Slavotinek were members of Cardinal Gibbon’s flight club. The trio and their club advisor Marianist Brother Bernard Borchers were returning from a trip to Dayton, Ohio, when their plane crashed near Frederick.

The statue’s original dedication decades ago was “heartwarming,” said Slavotinek.

“But I think bringing it here actually meant more,” she said. “This was their parish, their school, their families.”

After the school closed, Slavotinek led efforts to bring the statue to St. Augustine by contacting Bishop Denis J. Madden, an auxiliary bishop of Baltimore, and Father Gerry Bowen, St. Augustine’s pastor at the time, she said. She cried when she heard her wish would be granted, she said.

St. Augustine parishioner Wayne McDowell, who graduated from Cardinal Gibbons High School in 1967, was among alumni who worked with the archdiocese to obtain the statue.

The statue had several cracks, which caused concern that an attempt to remove it would cause further damage. However, five alumni moved the statue successfully last winter, and secured it to a pedestal next to St. Augustine School’s front entrance in May. A plaque with the victims’ names is secured to the base.

The dedication was an “occasion for us to remember, with gratitude, the history and the legacy of Cardinal Gibbons High School” and Brother Borchers, DeMinnis, Mitchell and Slavotinek, Archbishop Lori said during the Mass.
During the dedication, Sis Slavotinek placed a large flower arrangement in front of the statue. At 81, she is the only living parent of the three victims, she said.

Although the dedication focused on the victims, it also stirred emotion over the closure of Cardinal Gibbons School. After the archdiocese announced its plans to close the 48-year-old school in 2010 as part of a 12-school consolidation, some alumni, faculty, students and parents tried unsuccessfully to find a way keep the school open.

Marianist Brother Frank O’Donnell was the school librarian in 1968 and principal from 1969 to 1975. He said he hoped the dedication could help some people heal from the loss of the school.

“I think the archdiocese upset a lot of people because of the (closing) process,” he said.

“There was a great spirit in the school,” he added, especially because of the dedicated parents.

St. Agnes Hospital announced in March that it plans to buy Cardinal Gibbons’ campus, which is adjacent to the hospital.