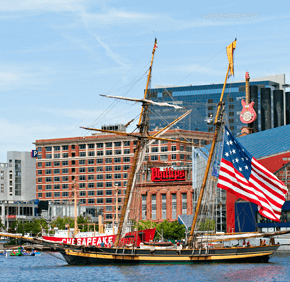 Baltimore will take center stage June 13-19 as more than 40 tall ships and naval vessels make their way to the harbor to launch the Bicentennial of the War of 1812. Events have been scheduled throughout the week, such as the U.S. Navy Elite Parachute Team parachuting into Patterson Park June 13, much to the delight of the hundreds who gathered, and the U.S. Navy Blue Angels, which will be featured in air shows June 16-17 over the Middle Branch of the Patapsco River. Public viewing sites for the air show, according to the Star-Spangled Celebration website include Fort McHenry National Monument and Historic Shrine and the grounds of MedStar Harbor Hospital. Air craft landings and take-offs may also be viewed at Martin State Airport.  Because this is the first time the Baltimore area has hosted such a show, it is difficult to speculate on crowd size, the website notes.

It was in 1814, after the bombardment of Fort McHenry in the battle of North Point that determined defenders held the fort, inspiring Francis Scott Key to write what became known as “The Star-Spangled Banner.” The flag he saw in the dawn’s early light was made by Baltimore native Mary Pickersgill.

The more than two year struggle will be commemorated from June 2012 to February 2015.

Below, watch a slideshow of some of the tall ships visiting Baltimore.