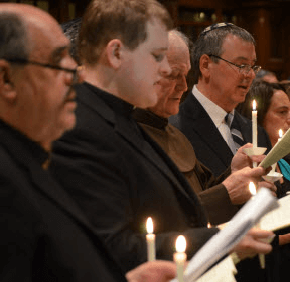 As she somberly lit one of six candles held aloft in a bronze menorah at St. Mary’s Seminary and University in Roland Park, 13-year-old Cailin Phebus’ thoughts focused on the 6 million Jewish lives snuffed out during the Holocaust.

“I was thinking that I hope that the kids and men and women who died are remembered,” said Cailin, a seventh-grader at School of the Cathedral in Homeland. “We can’t forget.”

Nearly 200 people of faith participated in the annual St. Mary’s service, with many of the seminarians and faculty members wearing traditional Jewish yarmulkes.

The four-foot-tall Holocaust Menorah was a commissioned copy of one sculpted by Israeli artist Aharon Bezalel and presented to Blessed Pope John Paul II at the Vatican in 1999. The seminary has had it on permanent display since 2001.

During a reflection, Rabbi Dana Saroken of Beth El Congregation of Baltimore noted that in Hebrew, “Shoah” means “Catastrophe.” It can be uncomfortable to think about the innocent people who were “humiliated, tormented, tortured, shot, gassed, burned and treated like human guinea pigs,” she said, but the horrors of history must never be dismissed.

The Holocaust is part of the Jewish story, she said.

During the service, Thom King, a cantor from Beth El Congregation, sang mournfully in a rich baritone.

The prayer is central to the Jewish faith: “Hear, O Israel, the Lord our God, the Lord is One.”

Members of the St. Mary’s Seminary Schola also sang Psalm 136, giving thanks to the “God of love.”

Franciscan Father Daniel Grigassy, director of liturgy at the seminary, said the Holocaust victims can be remembered by knowing their names and the stories attached to those names.

“We praise and bless God because even in the midst of such suffering, the promise of God’s covenant remains,” Father Grigassy said.

As people of all ages left the service, they picked up 144 ceramic butterflies that had been hand-painted by seventh-graders from the School of the Cathedral. The butterflies represented children lost in the Holocaust and were accompanied by cards that told their individual stories.

Sulpician Father Robert Leavitt, St. Mary’s former president-rector, said it would “please almighty God” if the butterflies were placed in home gardens to help people to remember the Holocaust.

“The butterflies are symbols of hope,” said Cailin, who helped paint the objects with her classmates. “They were symbols of hope for the Jewish kids and people in the concentration camps who never saw them. We can remember their lives today.”