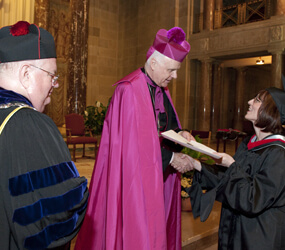 St. Mary’s Seminary and University in Roland Park celebrated the graduation of 19 students from its Ecumenical Institute of Theology May 14, including seven Catholic students from the Archdiocese of Baltimore. In addition, 22 seminarians received degrees from the School of Theology. Among them was Rev. Mr. Marc Lanoue, a priesthood candidate for the Archdiocese of Baltimore who will be ordained by Archbishop Edwin F. O’Brien June 13.

Honorary degrees were conferred on Dr. Alan F. Greenwald for his 47 years of providing psychological services to seminarians at St. Mary’s, and to Dr. Frank Matera, the Andrews-Kelly-Ryan professor of biblical studies at The Catholic University of America, for his contributions to biblical and theological scholarship. Father Matera gave the graduation address. Archbishop O’Brien presided.

Recipients of the Ecumenical Institute’s master’s in theology from the archdiocese include Leslie Gayle Davis of Our Lady of Grace in Parkton, Sandra Elizabeth Geertsen of the Church of the Nativity in Timonium, Jan Marie Menefee McDonnell of Sacred Heart in Glyndon, Deacon William J. Pearson of St. Vincent de Paul in Baltimore, and Julie Clare St. Croix of St. John the Evangelist in Frederick. The master’s in church ministries was awarded to Susan C. Crowley of St. John in Westminster and Mary Ellen Rector Fise of the Basilica of the National Shrine of the Assumption of the Blessed Virgin Mary in Baltimore.