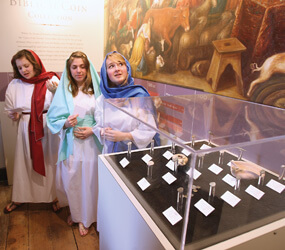 On a sunny afternoon in late March, several eighth-graders from St. Mary’s Elementary School were not roaming the nearby docks of Annapolis, nor were they ducking in and out of the state capital’s numerous shops and eateries.

Instead, they were standing in the Charles Carroll House, dressed in first-century garb and explaining the history of rare biblical coins on display.
“This is great!” cackled Redemptorist Father John “Jack” Kingsbury, pastor of St. Mary, Annpaolis, with delight.

It might not have been an ordinary day for most teenagers, but the eighth-graders serving as docents were having fun in their long flowing robes and headwear.

Behind the encased coins was a re-creation of a painting depicting Jesus entering the temple to turn over the moneychangers’ table. Father Kingsbury estimated that the rare display of Jesus’ anger occurred around 28 A.D.

A coin enthusiast, Father Kingsbury amassed the collection over the years and will eventually gift it to his religious order, which administers to St. Mary’s parish and schools as well as the Charles Carroll House.

“The question I’m answering with the exhibit is, what type of coin could possibly be present on that table at the time this happened,” Father Kingsbury said. “These coins will be from around 28 A.D. and before.”

History permeated the March 29 exhibit, which came just four days after Maryland Day. Charles Carroll, the lone Catholic signer of the Declaration of Independence and a staunch defender of the rights of Catholics, lived on St. Mary’s grounds.

“For me, this is a tribute to Carroll,” Father Kingsbury said.

The collection of shiny bronze and silver coins will be on display throughout the summer at the Charles Carroll House. Father Kingsbury believes it to be one of the most thorough collections of biblical coins in the U.S.

“It’s shocking that they’ve been around for 2,000 years,” said Conor after conducting one of his many tours.

Father Kingsbury said the key coin was the Shekels of Tyre, the temple tax and the coin given to Judas as his reward for betraying Christ.

“The purity of this coin was known through all of the world at this time so that they wanted the best possible coin to pay the tax,” Father Kingsbury said.

The first-century dress worn by the students helped visitors become immersed in the environment.

“They kind of sprung that on us afterward,” Caroline said with a laugh when asked about her biblical clothing. “We didn’t have time to back out!”

As Caroline explained the coin history with her friends Meghan and Jordan, it was clear that they had become invested in the coins. They deftly answered questions, thanks to tutoring from Father Kingsbury.

“We learned about their symbols and the meanings behind them,” Meghan said.

The eighth-graders met with the pastor once every two weeks since August.

“Someone said they basically started out as a bunch of coins and they didn’t mean all that much, but now each one has a little story to tell,” Father Kingsbury said. “I love that’s where this whole thing went.”