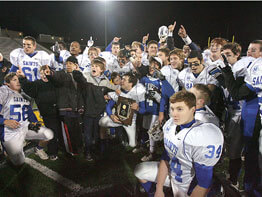 It’s been an exceptional year for the boys’ athletic programs at St. Mary’s High School, Annapolis, as the 2007 calendar year winds down.

In fact, it was the first thing Dave Lanham, athletic director, said after the Saints edged the two-time defending champions from Archbishop Spalding, Severn, 26-20 on Nov. 16 under the lights at Johnny Unitas Stadium on the campus of Towson University.

“This makes three championships for us in this calendar year,” said Lanham, referring to boys’ basketball in February, baseball in May and now football in November. Yes, it’s been an exceptional year for this Annapolis school, with enrollment significantly lower than their competition throughout the year.

The record books indicate that the last time the Saints held a football title was in 2002, sharing the top honors with St. Paul’s and Severn School.

But the gridiron boys from Annapolis are on a roll, and the future looks bright for Mike Clay, head coach, and his ever-improving football program.

It was poignant to watch the Saints as time expired in regulation and the win was theirs. The first thing the majority of players did was sprint toward the stands to be embraced and applauded by the hundreds of friends and family who were on hand to watch the MIAA B Conference season come to a close.

The Saints were led all season long by junior transfer and level-headed playmaker Peter Athens at quarterback. Smart, quick and observant, Athens was able to read the Cavs’ defense time and time again and marched his team toward the goal with confidence.

The Saints completed their season with an 8-1 record, with their only league loss to Spalding on Oct. 26 by two points, 21-19. This edge set the stage for the rematch and all the marbles. In fact through halftime of the championship game, it looked like Spalding was going to three-peat, taking a 20-12 lead into the locker room, but the Saints recharged and came out firing on all cylinders.

Deep into the third quarter the Saints experienced a huge momentum change. With big defensive stops by the Saints’ John Anderson and J.P. Dalton, a stellar ground game by Neill Lewnes and air game with Athens to senior Dontra Peters, the Saints kept control and sealed the win.

After the game, Lewnes was all smiles, saying, “I’m just really glad we could come out and win this championship. It means the world to us.”

Senior J. P. Dalton was right behind Lewnes to comment on the team’s success, “We were determined tonight. We made the stops when we needed to. Our offensive and defensive lines were great. We knew what we needed to do and we did it.”