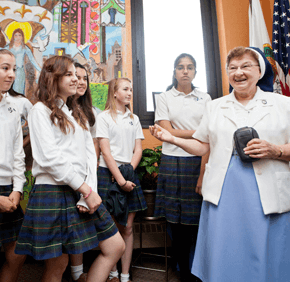 By Elizabeth Lowe
elowe@CatholicReview.org
ABERDEEN – St. Joan of Arc School celebrated its 60th anniversary May 30, the feast day of its namesake.
The festivities began with Mass, celebrated by Archbishop William E. Lori and Father William F. Franken, pastor of St. Joan of Arc parish.
After the liturgy, Archbishop Lori blessed a mural of St. Joan of Arc that the eighth grade class and artist David Cunningham, a parishioner of St. Ignatius in Baltimore and an alumnus of Calvert Hall College High School in Towson, created. The vibrant mural is painted on a cinderblock wall near a stairwell in the school.
View a slideshow from the event:
See a photo you would be interested in purchasing? Click here.
“Bless this mural, make it a source of inspiration, make it a recommitment to the faith,” the archbishop said during the blessing. “One more thing – St. Joan of Arc, pray for us.”
Eighth-grader Briana Baier, a parishioner of St. Francis de Sales in Abingdon, said producing the mural was a “team effort.” Briana and her classmates helped Cunningham to design, draw and paint it.
“It’s our idea of St. Joan of Arc and how we’ve imagined her,” she said.
Briana said she came up with the words quoted on the wall: “You are brave. You have the strength of an army. Believe in yourself and you will be your own.”
Eighth-grader Gabriella Cirincione, a parishioner of St. Joan of Arc, helped sketch part of the mural.
“I have been here for nine years,” Gabriella said. “To leave my legacy, it was a lot of fun.”
Cunningham said he and the students worked on the project from Feb. 19 through the end of March.
“It’s a legacy piece,” he said. “A mural is a legacy. It’s a privilege and an honor to work with kids.”
Also in honor of the occasion, Sister of St. Casimir Margaret Petcavage, who taught fifth through eighth grade at the Aberdeen school from 1976 to 1977, returned. Her religious order, which founded the school, served there until 1997.
To raise funds for Sister Margaret’s plane ticket from Chicago to Baltimore, students and faculty donated money to dress down on several occasions. In all, $750 was raised, said Margie Forbes, the school’s marketing and development director. About $500 was donated to Sister Margaret’s religious order.
Sister Margaret said it was “exhilarating” to return to St. Joan of Arc.
“I love it,” she said. “It’s about the same, it’s just as lively. It’s a sign of a successful school.”
Sister Margaret recalls fondly the year she taught there.
“The students, they were a joy to teach,” she said. “They cared about their faith and they had a joy to them.”
During her visit, Sister Margaret talked to students about her memories of St. Joan of Arc and her role as vice postulator, promoting for the cause of sainthood for Venerable Mother Maria Kaupas, foundress of the Sisters of St. Casimir.
Gabriella, the eighth-grader, was excited for Sister Margaret’s visit.
“She is bringing stories of when the school first opened,” she said.
Maria Stauffer, the school’s first grade teacher, said her students were “really excited” to meet Sister Margaret.
“A lot of them have never seen a nun,” Stauffer said. “I asked them ‘what did you notice?’ They said ‘that thing on her head.’ It was interesting to hear her perspective on the students.”
A school carnival, also held May 30, featured food, games, a dunk tank, face painting and moon bounce.