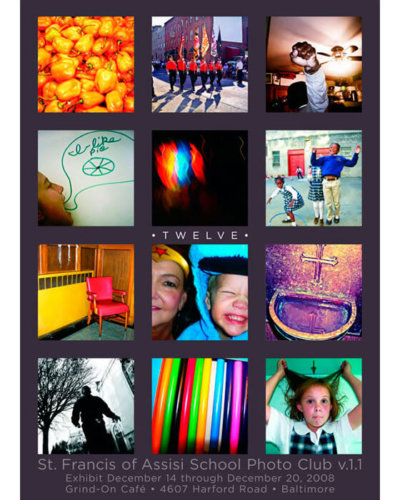 Dave Pugh has been looking at impressive photographs by the students of Baltimore’s St. Francis of Assisi School all fall.

They are likely to produce a few more indelible images Dec. 14-20 when they see their masterworks framed and on display at the Grind-On Café on Harford Road.

“I think it’s going to be a big surprise for them to see their photos enlarged to that extent, framed and hanging on a wall,” Mr. Pugh said of the 12 members of the St. Francis of Assisi School Photo Club.

Started in September by Mr. Pugh, a graphic designer, and fellow parent Steve Parke, a photographer, the club is for third through sixth-grade students. Over the last several months, the students have gained an appreciation for the history and composition of photographs, Mr. Pugh said.

An opening reception will be held at the café Dec. 14 from 5-8 p.m. Photos displayed at the café will be sold and the money earned will be re-invested into the photography club, Mr. Pugh added.

The group met each Monday and students brought their own digital camera to the classroom. They would take short excursions to find new and interesting subjects. The group, Mr. Pugh said, has been such a success that another will form soon.

“There was a growing process of the club from beginning to end,” he said. “There was a confidence to what they were doing. They really paid attention and we’re responding with a gallery show of amazing quality photographs we’ve gotten from the kids.”