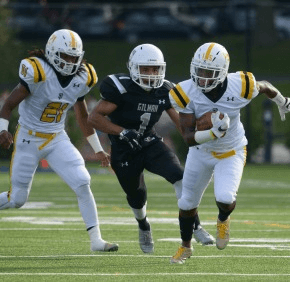 Deacon B. Curtis Turner
The best season in the remarkable history of the girls’ basketball program at St. Frances Academy in Baltimore appeared over earlier this month, when the Panthers won the Bishop Walsh Invitational in Cumberland to improve to 30-0.
That’s not a bad a way to close out the year. St. Frances, though, has a chance to top it this weekend.
The Panthers received an invitation to the Dick’s Sporting Goods High School Nationals and a date with Hamilton Heights (Tenn.) Christian Academy at 11 a.m. March 31 at Christ the King High School in New York. The game will be televised on ESPNU.
With a victory, St. Frances will meet Miami Country Day or Seton Catholic of Arizona in the April 1 championship, at 10 a.m. ESPN2 will televise that game.
“Our players really wanted to participate in it,” said coach Jerome Shelton, whose team is No. 10 nationally in the USA Today rankings. “There are so many other good high schools in that top 25, but because of state regulations couldn’t participate. We’re blessed to have the opportunity to be one of the four teams participating.”
The Panthers received word March 15 their season was extended by a game or two. To reach this point, they beat eventual state champions in Florida (Boca Raton) and North Carolina (Northwest Guilford), as well as traditional Maryland power Eleanor Roosevelt of Prince George’s County.
They also claimed their 10th Interscholastic Athletic Association of Maryland title since 2001, including their second in a row.
“We like to challenge ourselves as coaches and players,” Shelton said. “We want to put them in situations where they will rise to the occasion and play the top level of talent inside and outside of this area.”
Shelton has presided over the St. Frances program since 1991, sending dozens of players to college programs and Angel McCoughtry to gold medals representing the United States in the last two Olympics. This particular team, however, has a special blend of everything needed to turn in a spectacular season.
He credits senior forward Mia Davis, The Sun’s Player of the Year who is bound for Temple University in Philadelphia, and junior Nia Clouden for providing leadership, but the Panthers also have several outstanding freshmen, such as 6-2 Angel Reese, another All-Metro first-team selection. It is a deep team, relying on its bench during its undefeated run.
Clouden, the Gatorade Player of the Year in Maryland, has made an especially profound impact as the centerpiece of the offense.
“Nia has shown great leadership this year,” Shelton said. “She is a very talented point guard who can score from anywhere on the floor. She’s a willing passer and she’s improved as a defender. She’s just a player that’s exciting to watch.”
The potential of a 32-0 season and a championship in a national tournament would be notable even by the Panthers’ lofty standards.
“What is that, the cherry on top?” Shelton said. “That would be great. It would be recognition for our city and our school. I’m looking at such a larger context than just St. Frances. The Baltimore area has some great basketball teams. I saw an article where we (Maryland) have the highest percentage of student-athletes going to major schools (to play basketball) than any other state. I think it just speaks volumes of the talent level in this area.”

Patrick Stevens is a freelance writer for the Catholic Review.