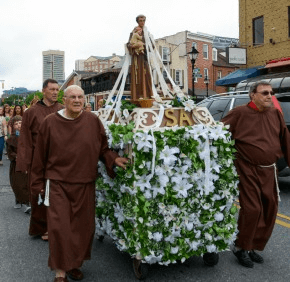 By Paul McMullen
pmcmullen@CatholicReview.org
Twitter: @ReviewMcMullen
One-hundred and 12 years after newcomers to America prayed to St. Anthony of Padua to intercede in the face of impending disaster, Little Italy caught another break in the weather June 5.
Heavy rain in the forecast didn’t arrive until the Feast of St. Anthony Italian Festival was in its closing hours, well after a religious procession that began and ended at St. Leo the Great Parish.
“St. Anthony came through for us again,” Deacon Douglas P. Kendzierski said after the Mass that preceded the procession.
The parish’s St. Anthony Society was founded in 1904, the year of the Great Baltimore Fire that reshaped the city. As flames spread east and residents fled to Patterson Park, according to the parish history, the faithful of St. Leo the Great “gathered on the east bank of the Jones Falls and prayed to God to spare them.”

Someone said “St. Anthony protect us!” Shortly thereafter, the wind changed direction and the rest is a more than century-old ethnic tapestry of philanthropy, food and custom, in the form of a street festival that ranges from Italian specialties to a bocce tournament that evokes as much passion as the opera.

The morning included a mash-up of traditions, as the music at 9:30 a.m. Mass was provided by the parish’s folk group and the first reading, Kings 17:17-24, was given in Italian by Anna Brotto.

A statue of St. Anthony of Padua was the centerpiece of an ensuing procession through the streets of Little Italy, which was led by the Baltimore City Fire Department’s Truck 5 and trailed by Mass-goers and parishioners.
Returning to the intersection of Exeter and Stiles in front of St. Leo the Great, Tania Bindhoff, a cantor for the parish, sang both the National Anthem, then that of Italy’s, in the vernacular.
The morning included a substantial Knights of Columbus presence, courtesy of the parish’s St. Vincent Pallotti Council #145355. Monsignor James W. Hannon, director of clergy personnel for the Archdiocese of Baltimore, celebrated Mass, filling in for Archbishop William E. Lori, who was called away on other matters.
Monsignor Hannon noted that his priestly assignments included pastor of the St. Anthony Shrine in Emmitsburg and the former St. Gabriel in Allegany County. The latter inspires the August festival sponsored by St. Leo the Great Parish.
Before the procession, Pallottine Father Bernard P. Carman, pastor of St. Leo the Great, blessed bread that had been donated by one of the many Italian establishments represented at the Mass and festival.
“I couldn’t help but thinking,” he said, “that I should be using melted butter instead of holy water.”