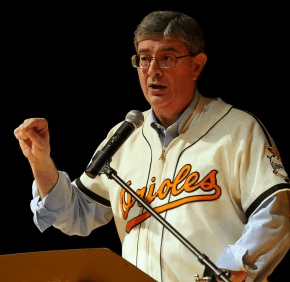 By Erik Zygmont
ezygmont@CatholicReview.org
TOWSON – Nearly 800 men attended the Catholic Men’s Fellowship Conference at Calvert Hall College High School March 14, but sometimes it’s a series of baby steps that gets them there, said Tim Feist of St. Andrew by the Bay, Annapolis.
“We have guys who are wandering about, maybe going to church with their wives, but reluctantly so,” said Feist, who leads the parish’s Beer and Barron men’s group, which meets every other week to “socialize with a good beer, watch DVDs of Father Robert Barron and enjoy some great discussion.”
Feist’s group is perfect for those “alienated Catholics,” he said, who might need to start small.
“Their wives will say, ‘Go do this – You can drink a beer and watch a movie, can’t you?’” said Feist.
Sometimes it snowballs. Beer and Barron is one of three active men’s ministries at St. Andrew, which sent some 40 men to the annual conference.
“We basically put a full-court press on all the men in our parish,” said Jim Bors, who leads Men of St. Andrew, Fisher of Men, another men’s ministry at St. Andrew by the Bay focusing on Bible study. “We told our men to go out and invite men to the conference,” Bors said. “Don’t just put it in the bulletin. Don’t just talk about it at Mass.”
The 2015 conference program included a tear-out sheet on which men could sign their names to signify a commitment to “go back to their parishes, pray, and discern what the Holy Spirit could be calling them to do to start a men’s ministry,” said Bors.
To view a slideshow, navigate the arrows below.
Nearly 20 percent of the men at the conference signed their names, tore out the sheets of paper and placed them in offering baskets.
“Nothing like this – a deliberate and planned challenge, let alone such a strong response – has happened in the 18 year history of the conference,” said Bors, who recently joined the Catholic Men’s Fellowship Conference board.
It might have been unprecedented, but it was very much in keeping with the theme of the 2015 conference, “The New Evangelization as a Way of Life,” as well as the remarks of its internationally-known Catholic speakers.
“They’re going to be setting the men on fire for the need for an antidote to the decay of our culture,” Bors said. “Men need to get up and do something.”
Speakers from the intellectual George Weigel to the accessible Edward Sri explored the present need for evangelization and exhorted their audience to fill it.
Weigel – a distinguished senior fellow of the Washington, D.C.-based Ethics and Public Policy Center, author, columnist and frequent radio and television guest – warned that the struggle of the 21st Century is against nihilism, “a soured cynicism that drains life of meaning … and makes sacrifice for the common good laughable.”
American liberty, Weigel said, was founded on the notion “that our rights had to be tethered to our responsibilities,” and that “God inscribed moral truths into us.”
“If there are no things as they are,” Weigel said, “if everything is up for grabs … if even maleness and femaleness are reimagined as social constructs, then politics becomes merely the will to power – who gets to impose their power on whom.”
Sri also referenced to a moral murkiness of today’s society. He pointed to the pope’s well-known remark that, with regard to abortion, gay marriage and contraception, “it is not necessary to talk about these issues all the time.”
“Does the media not quite get Pope Francis accurately? Does that happen?” Sri said, drawing laughter from the audience and referencing the tendency to interpret those words as a concession to modern times.
According to Sri, the pope’s remarks encouraged Catholics to affirm unpopular moral truths from a “much larger picture” of a Catholic Church that stands for “the love of Jesus Christ, love of neighbor, and a God who loves you so much.”
Following a concluding Mass celebrated by Archbishop William E. Lori, conference attendees left with much to ponder as well as the advisory to form their own men’s ministry groups.
Father Jeffrey Dauses, whose St. Andrew by the Bay has had so much success in that arena, encourages pastors to dedicate specific time for parish men to pray on that idea, and then “get out of the way and let the Holy Spirit do what the Holy Spirit needs to do.”
“I didn’t come to this with any foregone conclusions,” Father Dauses said. “Let’s see what the hearts of men are looking for, and let’s see what the Holy Spirit is going to do.”
Also see:
Parade greens downtown Baltimore *Slideshow and Video*
Faith on a full stomach: Wining and dining with the Catholic Business Network
PrevNext