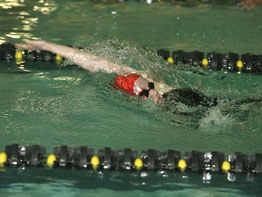 During the regular swim season, Archbishop Spalding High School, Severn, dominated the IAAM B Conference and carried that forward on Feb. 3 into the IAAM Swimming Championships held at the University of Maryland, Baltimore County campus.

The Lady Cavaliers scored 463 points, quite a feat for a B Conference school whose only competition, Severn School, scored 295 to place second.

Powered by a number of first-, second- and third-place finishes, the Cavs were just 12 points shy of the meet’s first-place finisher, McDonogh School, an A Conference competitor.

The Lady Cavs will be moving into the A Conference in 2008-2009 after going 8-1 in B Conference dual meet competition. Their only league loss came at the hands of St. Mary’s High School, Annapolis, in their first dual meet of the season.

Head Coach Kristen Koehler, finishing her fourth season with the team, has watched the growth of her senior swimmers since their freshman year.

Mount de Sales Academy, Catonsville, placed third overall with a score of 432. The team was led by Emily Dean, Mattie Riley and Erin Shea. Earlier in the week, the Sailors upended McDonogh School in a dual meet contest to place first in the IAAM A Conference; they placed second in the National Catholic Preps.