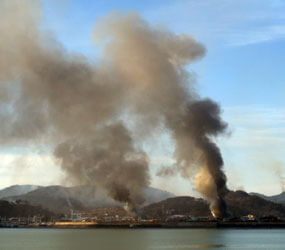 The shells also set fire to about 70 houses and mountains in the island, local media reported. Meanwhile, South Korea returned fire, aiming at the North Korean coastal artillery base.

North Korea accused the South of firing first. South Korea was conducting military exercises in the area but said its shells were not directed at the North.

Father Kim expressed concern for the island’s residents, including its more than 450 Catholics.

Father Baptist John Kim Hun-il, executive secretary of the Subcommittee for Aid to North Korea under the Korean bishops’ committee for reconciliation, said North Korea should stop the attack.

“Aiming at civilians and civil houses is inhumane, and it can cause further tragedy in the Korean Peninsula,” he added, urging South Korea to stop the return fire and, through dialogue, persuade the North not to provoke such attacks.