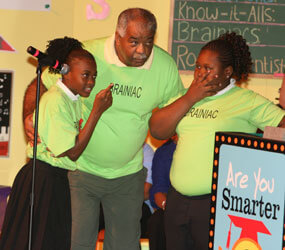 TOWSON – Despite being on a stage with the likes of David Simon, Rod Daniels and Baltimore Mayor Stephanie Rawlings-Blake, it was a group of talented 6th-graders who undoubtedly stole the show.

Sisters Academy of Baltimore held a major fundraising event at Goucher College’s Kraushaar Auditorium Oct. 16. “Are You Smarter Than a 6th Grader?” pitted the southwest Baltimore school’s 6th-graders’ knowledge of math, literature, world geography, and other subjects against that of local celebrities.

School Sister of Notre Dame Delia Dowling, president and co-founder of Sisters Academy, was elated that the six-year-old institution received support from hundreds, who paid $25, $75 for a VIP ticket.

“We wanted something that involved the school and showed what we’re about,” Sister Delia said. “We’re thrilled that the celebrities decided to participate.”

Sister Delia came up with the idea, while watching the television show, “Are You Smarter Than a 5th Grader.”

“We seek girls who are motivated, those who want to learn and want to further their education,” Sister Delia said.

The school’s goal is one that connected with Daniels.

“It’s something that’s really close to my heart,” said Daniels, a parishioner of Our Lady of the Fields in Millersville. “I’m an inner-city kid who grew up without having much for tuition. Because I am in a position to help out, I do.”

Though the school is small – each grade has about 20 students – that did not lessen the issues it has faced.

“We had to think of everything and come up with everything from nothing – from the curriculum, to the staffing, to the ambiance of the school,” Sister Delia said. “Now we have older students that the girls can look up to, and that’s pretty helpful.”

Some of those older students helped with the event, showing up as early as 9:00 a.m. to set up.

“I was proud to be a part of it all,” said eighth-grader Kapre’ Alexander. “I’m not on stage so I felt I had to pitch in some kind of way.”

Octavia Mclean, on the “Know It Alls” team with the mayor, was nervous beforehand.

“I feel happy but scared at the same time,” she said. “We’re going to be on stage with 700 people looking at us. But it’s OK, because I finally got to meet the mayor.”

School Sister of Notre Dame Debbie Liesen, principal of Sisters Academy, said that the school is unsure how funds raised will be used. Her main focus Oct. 16 was her students displaying what they have learned, and her belief that they will only show improvement, as others who have passed through the young school’s doors.

“As they get older and grow up, you get a sense of pride,” Sister Debbie said. “You watch how the education transforms them into who they are going to become. They will transform one person and then another person, like a ripple in a pond.”