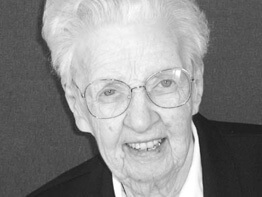 A funeral Mass was offered Aug. 30 at Villa Notre Dame in Wilton, Conn., for Sister Mary Louis Whalen, S.S.N.D., who was the oldest living alumna of the College of Notre Dame of Maryland, Baltimore. Sister Mary Louis, who also earned a graduate degree from The Johns Hopkins University, Baltimore, taught chemistry at the College of Notre Dame from 1932-1941 and 1950-1961. She also taught in several high schools in New England and served as vice principal and administrator until she moved to the Wilton motherhouse in 1998.