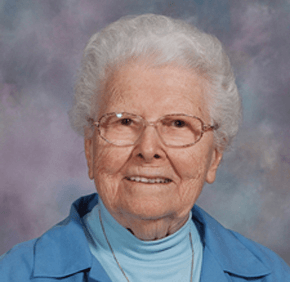 By Catholic Review Staff
A funeral Mass for Sister of St. Francis of Philadelphia John Catherine Rohe will be offered April 14 at Assisi House in Aston, Pa. Sister John died April 9. She was 96.
A native Baltimorean, Sister John was a parishioner of St. Joseph in Fullerton and a graduate of Seton High School in Baltimore.
Sister John had been a professed member of her religious order for 76 years.
Sister John ministered at schools in New Jersey, Pennsylvania, Florida and the Archdiocese of Washington from 1935 to 1993. Most of her service was in the Archdiocese of Baltimore.
Sister John taught at St. Katharine School in Baltimore from 1937 to 1947 and Towson Catholic High School in Towson in 1953. She served as principal of The Catholic High School of Baltimore from 1972 to 1982 and as a member of the support staff at St. Joseph School in Fullerton from 1988 to 1993.
She lived at St. Anthony Convent at St. Anthony of Padua in Gardenville from 1993 to 1997 and 1998 to 2007. Sister John served as a tutor and extraordinary minister of holy Communication to shut-ins.
In 2007 Sister John moved to Assisi House in Aston, Pa., her religious order’s retirement residence, where she served in prayer ministry until her death.
Two of her sisters and three cousins also entered the religious order. All are deceased, except for Sister of St. Francis of Philadelphia Jean Clare Rohe, a cousin who lives at St. Anthony Convent.
Click here to see more obituaries.
PrevNext