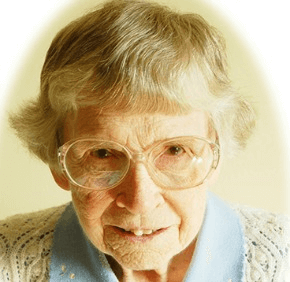 Born in New Haven, Ky., she joined the Ursuline Sisters of Louisville in 1940. Sister Denise graduated with a bachelor’s degree from the former Ursuline College Louisville, and did graduate work at Cardinal Stritch College in Milwaukee.

From 1947 to 1954, Sister Denise taught at the parish school at Sts. Peter and Paul in Cumberland. Her teaching ministry also included schools in Kentucky and South Carolina. In the 1970s, ’80s and early ’90s, she was on the faculty Monsignor Pitt Learning Center, now Pitt Academy in Louisville.

Addressing the needs of handicapped adults who sought independent living, Sister Denise worked with the Council for Retarded Citizens of Jefferson County, Ky., and lived with two women for several years, serving as a companion, supervisor, mentor and guide. From 1993 to 2005, she was a receptionist and volunteer at the Ursuline Motherhouse, Marian Home and the Ursuline Child Development Center, in Louisville. She moved to Mercy Sacred Heart in 2010, where she continued a ministry of prayer and presence.