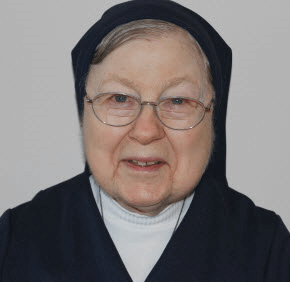 By Catholic Review Staff
A funeral Mass for Daughter of Charity Sister Angela Cool was offered April 22 at the Basilica of the National Shrine of St. Elizabeth Ann Seton in Emmitsburg. Sister Angela, an Emmitsburg native, died April 14 at Villa St. Michael in Emmitsburg. She was 94 and had been a sister 72 years.
Sister Angela  entered Daughters of Charity in 1941.
She earned a degree in elementary education and English from St. Joseph’s College in Emmitsburg in 1969. She cared for children in Maryland, Michigan, New York, Pennsylvania and Virginia.
Sister Angela managed the sisters’ Thrift Shop at Seton Center in Emmitsburg from 1983 to 1989 and served in the activity departments of Villa St. Michael from 1990 to 1993 and St. Elizabeth Nursing and Rehabilitation Center in Catonsville from 1993 to 1996. She ministered in pastoral care at St. Elizabeth from 1996 to 1999 and then in Florida until 2004, when she returned to Emmitsburg to serve in the ministry of prayer.

Sister Angela is survived by brothers J. Richard Cool of Thurmont and J. Seton Cool of Emmitsburg; sisters Mildred Sponseller of Hanover, Pa., Thelma Deathrage of Emmitsburg, and Frances (George) Hemler of Taneytown.; nieces and nephews and her Sisters in community.