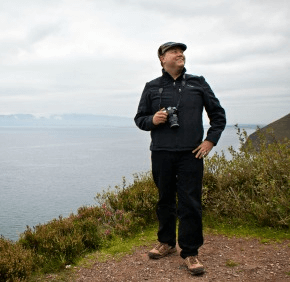 By Maria Wiering
mwiering@CatholicReview.org
DUNDALK – “Depression is a demon,” wrote Father T. Austin Murphy in March 2013. In a blog post simply titled “Depression,” he explained he had been diagnosed with the mental condition five years prior.
“It’s more than just feeling sad for a good reason, like the death of a loved one or listening to too many Morrissey songs,” he wrote, referring to the often bleak lyrics penned by the lead vocalist of The Smiths, a 1980s English rock band. “The feelings are paralyzing, and there can also be a vague physical pain as well.”
At the time of his diagnosis, Father Murphy was a chaplain at Towson University. He struggled to get out of bed in the morning. He was tired, but sleepless. He felt overwhelmed by small tasks, and cried for no reason.
People complimented Father Murphy on his weight loss, but he knew it was from not eating.
After a couple months, he saw his doctor. His sister’s wedding was approaching, and he didn’t want to ruin it. His doctor prescribed antidepressants, which gradually helped.
Today, Father Murphy, 42, still has ups and downs, he said, but hasn’t felt as low as he did. He manages his depression with medication and exercise, as well as a regular prayer regimen.
“It forces you to be reflective,” he said of prayer. “It helps to give a sense of perspective. As I reflect on the disease, one of the things that depression does is it robs you of perspective.”
Open struggle
The pastor of Our Lady of Hope, Dundalk, and St. Luke, Edgemere, is among the estimated one in 10 U.S. adults who report depression, according to the Centers for Disease Control and Prevention. October is Depression Awareness Month.
Robin Williams’ Aug. 11 suicide sparked a national conversation around the mental illness, which is suspected to have driven the comedian-actor to take his own life. News reports described people who felt the tragedy gave them reason to reveal their struggles with depression.
Father Murphy was tempted at first not to share his diagnosis with parishioners, but now he doesn’t mind that people know; he appreciates others’ prayers.
Everyone who experiences depression experiences it uniquely, Father Murphy said.
“I remember feeling so alone,” he said. “The feeling was so powerful. It’s hard to describe. There’s a pain that goes with it, but it’s not a pain you can point to.”
One of depression’s challenges is not feeling the joy of having faith in Jesus, Father Murphy said. That’s why he feels like it’s “a type of demon.”
“I think it’s something that’s meant to separate us from God and others,” he explained. “I do think the devil uses these types of things to put chinks in our armor as far as our relationship with God is concerned.”
From a faith perspective, Father Murphy said, depression can be a “cross,” which Jesus helps a person bear. However, he added, depression isn’t something one can “pray away,” nor does it mean someone isn’t faithful enough.
“You need to rely on the gifts of people around you, and that’s where the doctors come in,” he said.
Call for compassion
Author and former Catholic News Service columnist Therese J. Borchard has made what she calls “a ministry” of candid writing about her battle with manic depression. What started as a Beliefnet blog is now two books, a list of articles, regular contributions to Everyday Health and Psych Central websites, and an online support group.
Her first book on mental illness, “Beyond Blue: Surviving Depression and Anxiety and Making the Most of Bad Genes” (Center Street, 2010), has sold more than 11,000 copies, she said.
Her writing chronicles a lifelong struggle with anxiety and depression, two mental breakdowns, and her daily efforts to live with depression.
After a breakdown in 2005, she was “very, very suicidal” for about two years, said Borchard, a parishioner of St. Mary, Annapolis.
She didn’t believe she would ever wake up and want to be alive. She told God that if one day she did, she would dedicate her life to helping others facing the same struggle.
Depression still dogs her, but she is fulfilling her promise.
“I want to reduce stigma,” she said. “Part of how you do that is being very open and honest.”
Borchard, 43, leads a Facebook support group for people with treatment-resistant depression. She’s preparing to turn it into a website called Project Beyond Blue, a resource center and support network, including in-person meet-ups.
“I wish people treated it (depression) truly like an illness and would applaud all the efforts that people make to try to feel better,” Borchard said. “There’s a stigma that says you’re kind of pathetic if you can’t pull yourself up by your bootstraps.”
She expressed dismay that it took Williams’ suicide for some people to think about how devastating depression can be.
“My hope is that there is just more compassion for people who are suffering so much,” she said.
Father T. Austin Murphy blogs on faith and culture at JesusinDisney.blogspot.com. For more information on Project Beyond Blue, visit ThereseBorchard.com. For other resources on depression, visit the National Alliance on Mental Illness at NAMI.org.
Also see:
Pope: Don’t be afraid of critics; seek out, share Gospel with sinners
Stepping onto court a dream come true for student with cancer
PrevNext