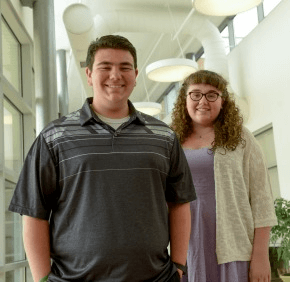 By Mary K. Tilghman
Special to the Review
SEVERN – Scott Myers and Darby Nisbett were honored for their long hours of service to Archbishop Spalding High School and the community with the nationally-recognized President’s Volunteer Service Award.
Both members of the class of 2016 spent hundreds of hours in service, raising funds, teaching religion and hanging drywall. Scott logged nearly 600. Darby stopped logging hers once she’d reached the school’s graduation requirement of 60, which includes 25 in direct community outreach.
All through his time at Spalding, Myers, the son of Dianne and Kevin Myers, volunteered and interned at Patuxent Naval Air Station in St. Mary’s County, where his grandfather, Bobbie Myers, works.
“He’s got a heart of gold,” said Myers, who credits his grandfather for his interest in service. “I like to step up and take leadership roles and help where I’m needed.”
He packed food boxes for families at his church, Chesapeake Christian Fellowship in Davidsonville, and was a polling judge during the primary election April 26.
At Spalding, he led the canned food drive, an annual benefit for the Anne Arundel County Food Bank. Myers collected donations of nearly $300 from area supermarkets and turned his tips from work at Port Annapolis Marina into two grocery carts filled with food.
“It was one of the best turnouts ever, which was really, really awesome,” Myers said of the benefit.
“He took charge of our food drive for two years,” said Sharon Dols, Spalding’s campus minister.
At a Habitat for Humanity work camp last summer on the Eastern Shore of Virginia, he hung drywall at one house and dug the foundation of another. Myers, who plans to double major in criminal justice and political science at the University of Maryland in College Park, served as a page during the 2016 General Assembly session and was invited back for a 2017 internship.
Nisbett, who attends Mass at the U.S. Naval Academy Chapel, has done everything from fundraising to reading to little children.
The daughter of Navy Capt. Thad Nisbett and Melissa Nisbett, a teacher at St. Mary’s High School in Annapolis, she was accepted at Gettysburg (Pa.) College and wait-listed at Haverford (Pa.) College. She plans to double major in psychology and studio art with the goal of becoming an art therapist.
“I like to get other teenagers passionate about helping others,” she said.
Nisbett was the president of the Key Club, a high school arm of the Kiwanis Club, which organizes two or three monthly fundraisers and was active with Spalding’s Green Club and a new wildlife conservation club.
She’s also taught second grade in Sunday school at the Navy chapel, volunteered at Camp Invention, a science camp in Annapolis, and helped children with homework at the Stanton Community Center in Annapolis.
“If we could focus on love and cultivate it and spread it, that could change the world,” said Nisbett, who received the Archdiocese of Baltimore’s Eagle of the Cross Award.
“They went beyond what we expect of our students,” Dols said of Myers and Nisbett. “These two really stand out. They really are going to be  sorely missed.”
To see more on Catholic Education, click here.
PrevNext