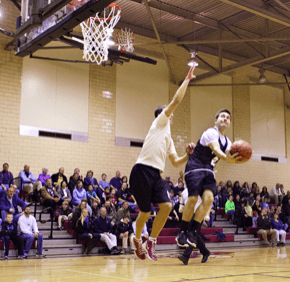 By Elizabeth Lowe
elowe@CatholicReview.org
The gymnasium at Archbishop Curley High School was packed with basketball players and spectators Jan. 17, but the Friars were not the ones on the court.
Rather, Baltimore seminarians and priests challenged 11 middle and high school youths at the Baltimore school in a game that was an effort to promote vocations.
The event shows youths “who we are and what we’re about,” said John Streifel, a first-year theology seminarian at St. Mary’s Seminary and University in Roland Park who played in the game.
“In the vein of what our Holy Father’s been speaking of so much lately,” Streifel said, “is not thinking of the church as just four walls we resort to on Sunday, but encompassing the entirety of our lives. This is an event that tries to do that.”
To view a slideshow from the event, navigate the arrows below.  Interested in purchasing a photo from the event? Click here to view our Smugmug gallery.
Father Michael A. DeAscanis, director of vocations for the Archdiocese of Baltimore, spoke about vocations to the nearly 200 people gathered before the game began.
“We need Catholic men and women to change the world,” Father DeAscanis said. “Live for a cause, live for Jesus Christ.”
In a competitive but friendly basketball game, the youths beat the “Men in Black,” 42-41.
“It’s great, coming together with priests and seminarians,” said Matthew Selba, a sophomore at Archbishop Curley and parishioner of St. Rita in Dundalk who played for the students. “It gives us a chance to unite.”
Selba, who wants to become a priest, began discerning his vocation in the fourth grade.
Dylan Holy, a freshman at Archbishop Curley who also played in the game, said the event “will help kids realize being a priest is more than being faithful to God. You can do other stuff. It exposes the priesthood outside of what you normally see.”
Holy, 14, a parishioner of St. Ursula in Parkville, said he is open to considering the priesthood.
“This might be a one-time exposure to ‘Wow, I didn’t know all of these young men are in the seminary in our archdiocese,’ ” said Liz Walz, a St. Ursula parishioner who organized the game. “To see them (priests and seminarians) outside the context of the norm, which would be just at Mass, it’s a different way of approaching it. It’s the universal call to be open to a vocation.”
Also see:
Ellicott City mural project sees Bible with ‘fresh eyes’
Overlea parish, school share special relationship
PrevNext