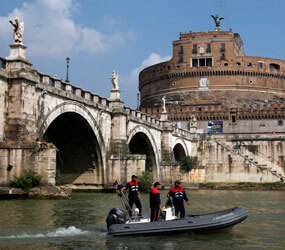 VATICAN CITY – The city of Rome launched beefed-up security measures in the days before the May 1 beatification of Pope John Paul II. Officers were even brushing up on their English to better help the hundreds of thousands of pilgrims expected for the event.

Italian authorities said there would be random bag searches and ID checks at the Leonardo da Vinci-Fiumicino airport, Civitavecchia seaport and Termini train station in Rome.

People with criminal records and those who would be “potentially dangerous for tourists” were to be “moved away from” the area in and around Termini train station, reported the Italian daily, La Repubblica, April 24.

Special security cameras were installed in “hot spots” in and around St. Peter’s Square where the beatification Mass will be held, the paper reported April 23.

More than 2,000 police, military police, firefighters, traffic officers and other security personnel were to patrol “three rings” of increasing degrees of security around the square, it said. Police were to even patrol the Tiber River in the area of the Vatican.

Police officers and operators responding to the emergency call number 113 had all completed intensive English language lessons so as to better serve visitors, it said.

Officers were to do a security sweep of trash cans, manholes and street drains in the area, parking was to be prohibited and vehicle traffic was to be diverted away from the roads closest to the April 30 prayer vigil at Circus Maximus and St. Peter’s Square the following morning. Only pedestrians were to be allowed to circulate in areas determined to be “high security,” La Repubblica said.