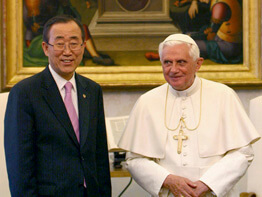 The two leaders discussed global trouble spots and cultural tensions during a 20-minute encounter in the pope’s private library April 18. It was the first papal audience for Mr. Ban, a former South Korean diplomat who took up his U.N. post at the beginning of the year.

A Vatican statement said the pope and Mr. Ban had discussed the need for a “restoration of multilateralism” in international affairs and the strengthening of the dialogue between cultures.

The Vatican confirmed that, as expected, Mr. Ban had officially invited the pope to visit the United Nations. Vatican sources have said the pope would like to make the visit, and that one possible time frame was in late September, for the opening of the U.N. General Assembly.

The Vatican said Mr. Ban’s visit served to highlight the contribution that the church and the Holy See can make toward resolving conflicts and promoting global understanding.

The Vatican also expressed its appreciation for the United Nations’ central role in maintaining peace and promoting development.