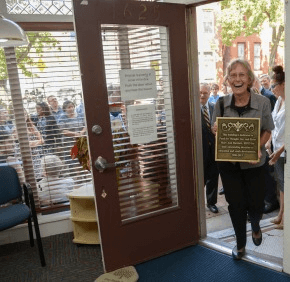 As the number of immigrants to the U.S. has drastically increased in recent years, so has Catholic Charities of Baltimore’s capacity to respond to their needs.

A new building, a three-story, former row house located at 1625 E. Baltimore St., will serve as a satellite location of the Esperanza Center, Catholic Charities’ immigrant services arm, and will be specifically purposed toward reunifying families and assisting human trafficking victims.

The original building at 430 S. Broadway will continue to house other services, including English classes, immigration legal services and health services.

“Our Broadway location was bursting at the seams,” said William J. McCarthy Jr., executive director of Catholic Charities of Baltimore at a dedication ceremony and blessing of the new building Sept. 15. “Services had expanded, and we were being asked to increase services to accommodate the significant increase in needs of immigrant families and particularly children.”

A building that met the criteria of size, location and price was elusive, until the board of directors for Food for Thought, a tutoring and afterschool learning center that served local children – many of whom happened to be immigrants – from 1990 to 2015, offered their building.

“Maybe the ministry has changed, but the mission has remained the same,” said School Sister of Notre Dame Mary Ann Hartnett, who ran Food for Thought. “It makes me so happy.”

The services at the Esperanza Center at Baltimore Street are funded in large part thanks to grant money from Lutheran Immigration and Refugee Service.

Moments before the dedication of a new Esperanza Center location at 1625 E. Baltimore St., School Sister of Notre Dame Mary Ann Hartnett shares a moment with Esau Portillo, a seventh-grader at Mother Seton Academy in Baltimore who was served by her Food for Thought afterschool and tutoring program, once housed in the same building. (Kevin J. Parks/CR Staff)

“Back in 2014, we recognized a need for immigrant families to have family reunification services,” said Virginia Fitchett, program manager of safe release support for LIRS. “Who better to meet that need than Catholic Charities, which has such a strong commitment to community and a great reputation within this community.”

The Esperanza Center at Baltimore Street will serve as one of two locations in the state offering fingerprinting services, a component of the background check that potential guardians undergo in the family reunification process. McCarthy emphasized that “holistic” services – including home studies, case management and sponsor readiness services – would continue after reunification.

“These services include help with school enrollment, case management, referrals to mental health services and coordination with other services at Esperanza Center, including medical services, ESL instruction and immigration legal services,” he said.

The new location will also offer case services to human trafficking victims, both children and adults.

Ever since unaccompanied minors from Central America began arriving at the southern border of the U.S., the Esperanza Center has seen increased demand for services for children and those who would care for them.

“Already, since July 1 of this year, we have served 228 sponsors and 219 children in the Safe Release Support Program,” McCarthy said. “We expect to serve over 1,300 sponsors and an equal number of unaccompanied children by the end of this fiscal year.”

A plaque recognizing the years of service by Sister Mary Ann and Food for Thought will hang in the Esperanza Center at Baltimore Street.

“I remember Sister Mary Ann saying only men want plaques and monuments, but this is a little different,” McCarthy said.

Dragon Boat Races are winning combination of competition and compassion