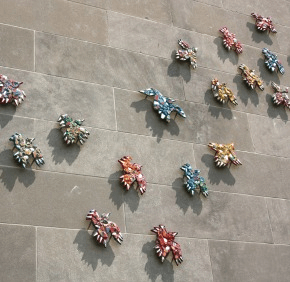 Compiled by Elizabeth Lowe
elowe@CatholicReview.org
St. Francis of Assisi School helps beautify Northeast Baltimore streetscape
St. Francis of Assisi School in Mayfield recently completed a permanent beautification project visible from Harford Road, according to Nicole Selhorst, the school’s advancement associate.
A $3,500 grant from the Baltimore Community Foundation funded the project, which included the materials used to create 103 colorful ceramic birds, Selhorst said. The birds, which were affixed to the school’s exterior May 24, create a mosaic.
Baltimore artist Toby Rivkin made the kits students and their families, St. Francis of Assisi parishioners and community members used to assemble the birds, Selhorst said. The birds were constructed from the cutouts of cement boards with tiles glued to them.

St. Francis of Assisi School recently completed a mosaic of 103 colorful ceramic birds on the outside of its Baltimore City School. (Courtesy Dave Pugh)
NDP earns top high school theater award
Notre Dame Preparatory School students recently received the top writing award – Best Critic Team – at the 12th Annual Cappie Awards, a theater and journalism recognition program for high school students, the Towson school announced. The award acknowledges outstanding writing for student critic reviews of area high school plays and musicals.
In addition to the Best Critic Team award, NDP students Nikki Smith and Sarah Jones, members of the Class of 2014, received awards for Best Comic Actress in NDP’s production of “A Midsummer Night’s Dream” and Senior Critic, respectively, according to the school.
For this high school theater season, nine NDP critics wrote 48 out of 639 student reviews of area school productions, according to the school. Twelve NDP reviews were published in area school newspapers and websites, representing 21 percent of the 57 total reviews published.
The 2013-14 NDP Critic Team included: Anita Batuure, Sarah Jones, Jenna Rayman and Julia Unitas, members of the Class of 2014; Julianna Bauerle, Kaitlyn Jones and Allison McLoughlin, members of the Class of 2015; Meredith Egan, Class of 2016; and Mary Charlotte Gitlin, Class of 2017.
Dubbed the “Academy Awards for High School,” the Cappies Program began in 1999. This year, approximately 1,100 students from 19 area public and private schools were included in the program, either as critics or as cast and crew members of reviewed shows, according to NDP.

St. John Regional Catholic School and Trinity School certified as Maryland Green Schools
St. John Regional Catholic School in Frederick and Trinity School in Ellicott City have been certified as 2014 Maryland Green Schools, the Maryland Association of Environmental and Outdoor Education recently announced. Mother Seton School in Emmitsburg has been re-certified as a Maryland Green School.
To be certified, the schools demonstrated and documented how they have integrated sustainable best management practices, environmental education curriculum, professional development opportunities and community engagement into their daily operations, according to MAEOE. The certification signifies that the schools are committed to developing stewards of the earth and reducing their environmental impact.
The Maryland Green Schools Program works to foster a student-led approach that incorporates local environmental issue investigation and teacher professional development with environmental best management practices and community stewardship, according to MAEOE. This year, more than 100 schools have been certified as Maryland Green Schools.
Loyola University Maryland student receives Fulbright
Christian Lewis, a member of Loyola University Maryland’s Class of 2014, was recently awarded a Fulbright research grant to study how the ocean-produced gases dimethyl sulfide and isoprene affect atmospheric chemistry, according to the Baltimore institution.
Lewis is Loyola’s sixth student Fulbright scholar since 2009, according to the school. He will travel to Kiel, Germany, to conduct his research at the GEOMAR Helmholtz Centre for Ocean Research from September 2014 to July 2015.
Lewis will work with Christa A. Marandino, a chemical oceanographer who studies trace gas flux from the ocean to the atmosphere to quantify the rate at which various gases are produced and degraded into ocean waters, data critical to accurate global ocean modeling and climate models, according to Loyola.
He will focus specifically on dimethyl sulfide and isoprene, two gases produced in the water by phytoplankton, and will collect samples from a fjord in the Baltic Sea, according to Loyola.
“My research will represent a small piece of data that fits into a much greater pool of data that gets made into climate models,” Lewis said in a statement. “This is a tremendous opportunity and a starting point to my future in the sciences, and it’ll be an excellent research experience that sets me on track for a future where I can play an integral role in some science that will impact the world in a good way.”
In fall 2015 Lewis will begin pursuit of a Ph.D. in earth system science at the University of California, Irvine, which he deferred after he accepted his Fulbright award, according to Loyola.
“I want to be able to do what I love – work in chemistry around the oceans – and do something that’s meaningful, and to be able to teach science the way it was taught to me at Loyola, making it fun and interesting,” Lewis said in a statement.
Notre Dame of Maryland University’s Renaissance Institute marks 25 years
The Renaissance Institute of Notre Dame of Maryland University celebrated 25 years of lifelong learning for adults ages 50 and older May 18, according to the Baltimore school.
Founded in 1989 by School Sister of Notre Dame Kathleen Feeley, the Renaissance Institute offers classes for the pleasure of learning, according to Notre Dame. Each year more than 100 noncredit courses, workshops and studio opportunities are designed and led by Renaissance members in two, 13-week semesters.
Working with a campus-based director, members plan, lead and enroll in a series of courses held twice a week during the spring and fall semesters, according to Notre Dame. A program’s success depends on member participation.
Members create the curriculum, design and lead courses and serve on at least one committee, according to the university. Renaissance members are committed to active involvement and informed discussion.
For more Catholic school news, click here.
Also see:
Lifelong learner- St. Ignatius, Baltimore, parishioner serves as Walters docent
Viva House volunteers to help after Baltimore teen is murdered outside its doors
PrevNext