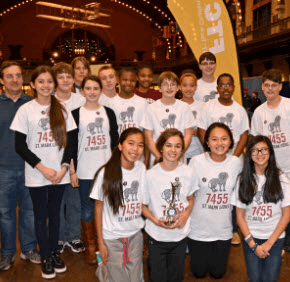 By Catholic Review Staff
The following is a collection of school news from around the Archdiocese of Baltimore.
The John Carroll School hosts lesson on Holocaust
The John Carroll School in Bel Air hosted eight schools Feb. 6 for “Lessons of the Holocaust: Standing Up To Hatred.”
The program featured speakers and a discussion of the history and relationship between Catholics and Jews over the past century, according to John Carroll. It used the Holocaust and its lessons as a starting point to promote tolerance, understanding and respect between students of diverse backgrounds.

Rubin Sztajer, a Holocaust survivor, met with students of The John Carroll School in Bel Air and eight other schools Feb. 6 in an effort to promote tolerance, understanding and respect between students of diverse backgrounds.  (Courtesy Carly Bynion)

Sacred Heart School students completes service project
Sacred Heart School students participated in a service project to benefit Sarah’s Hope, a 24-hour emergency shelter that serves women and their families, during Catholic Schools Week last month, according to the Glyndon school.
Students collected snacks, books, DVDs, art and gardening supplies and made cards for the residents, according to Sacred Heart.
“Each item that you collected is and will be used to provide fun activities and snacks to our families here,” said Laura Starsoneck, Sarah’s Hope volunteer coordinator, in a statement.
St. John Regional student, teacher among math challenge winners
St. John Regional Catholic School eighth-grader Thomas Nishimoto and art teacher Lisa Cutchin were recently selected as winners of the Innovation Math Challenge, the Frederick school announced. Of the 60 entries, 17 were selected.
Nishimoto and Cutchin were the only teacher/student collaboration, according to the school. The title of their project was “The Art of Math.” To learn more, visit the innovation website wgbh.org/support/innovationfund.cfm.
Watch the video here.
Mount St. Joseph High School’s programming team places second in competition
Mount St. Joseph High School’s programming team came in second place in the final round of the recent NASA/MIT Zero Robotics SPHERES Challenge, the Irvington school announced.
The SPHERES Challenges are held each fall and open world-class research facilities on the International Space Station to high school students, according to Mount St. Joseph. Students created code and programmed small satellites to play a challenging game in zero gravity conditions. The goal was to build critical engineering skills, such as problem solving, team work, design thought process and operations training.
This year, the game was Cosmo Spheres, according to the school. More than 100 U.S. teams, which competed to save the earth from an incoming comet, began the tournament in September. The top 54 teams advanced to the semifinals and were grouped into alliances, with three teams in each.
“The students were at the edge of their seats as we watched the feed from MIT,” said George Kapusinski, computer science teacher and mentor to Mount St. Joseph’s team, in a statement. “This is our second top three finish in three years and demonstrates how strong our STEM (Science, Technology, Engineering and Math) program is. It’s a great opportunity to compete against the top schools in the country and to apply engineering, math, physics and computer science concepts in a really cool tournament.”
St. Mark School robotics team participates in competition
The 16 members of St. Mark School’s rookie middle school FTC FIRST robotics team No. 7455 competed Jan. 11 at the U.S. Naval Academy’s FIRST Qualifier against 25 high school teams, according to the Catonsville school.
Tasks included team members writing a newsletter, developing a website, designing a team T-shirt and building a robot in three months, according to the school.
St. Mark placed 13th out of 26 teams and won the motivation award, according to the school.