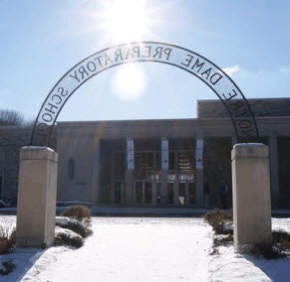 By Catholic Review Staff
Five Catholic schools named top small business workplaces
Five Catholic schools in the Archdiocese of Baltimore were among The Baltimore Sun’s 100 Top Workplaces for 2013 in the Small Employers (50-149 employees in the Baltimore area) category.
Archbishop Spalding High School in Severn ranked No. 4; Notre Dame Preparatory School in Towson (on the list for the third consecutive year) ranked No. 11; St. Ursula School in Parkville ranked No. 36; Loyola Blakefield in Towson ranked No. 46; and The Catholic High School of Baltimore ranked No. 47.
The schools were ranked with 60 other Small Employers. Check them out here.
Technology center dedicated at Our Lady of Perpetual Help School
Our Lady of Perpetual Help School recently celebrated the dedication of the iLC, its new Interactive Learning Center.
The center provides students at the Ellicott City school with the latest in instructional technology and prepares them to adapt to advances in an increasingly digital world, according to the school.
Highlighting the new technology, the ceremony was video-streamed live to students in their classrooms.
Baltimore Auxiliary Bishop Mitchell T. Rozanski helped to dedicate the center, which was constructed this past summer.

The new technology center at Our Lady of Perpetual Help has been completed and was recently dedicated. (Image via OLPH Facebook)

“Today we ask God’s blessing on this center of seeking, learning and teaching what is true,” Bishop Rozanski said.
The digital learning environment includes a computer lab with laptops and iPad minis, dual-screens, interactive technology and a library and reading area for younger students, according to the school. Students use the iLC at least once a week for technology courses and additional content classes. All students have access to the center.
“One of the many benefits of the iLC is seeing how technology helps students become problem solvers,” Tina Marcinkus, OLPH’s technology director, said in a statement.
OLPH raised $175,000 for the project, which includes a $65,000 grant from the Marion I. and Henry J. Knott Foundation, according to the school.
Trinity School student honored for aid to military service members
Mitchell Adkins, a third-grader at Trinity School, was invited to visit the White House last month because of his dedicated and selfless service toward military members, the Ellicott City school announced.
Mitchell was selected to be part of the delegation representing Blue Star Families, an organization formed by a group of military spouses to raise the awareness about the challenges of military family life with civilian communities and leaders, according to the nonprofit’s website.
“As a military child who has lived in Arizona, Hawaii, Germany and now Maryland, Mitchell has learned to be involved in his community,” Mitchell’s mother, Tracy Adkins, said in a statement.
Mitchell volunteered to help paint the Fort Meade USO when it was relocated and in need of refurbishing, according to the school. Noticing the lack of available food for hungry service members/veterans in the food pantry, he began the “Care If You Can” canned food drive. He collected canned food to stock the shelves.
He is also a frequent guest reader for Books On Bases, a reading initiative for military children, sponsored by the Blue Star Families, according to the school.
“Mitchell is hardworking, confident and is always looking for ways to help out,” Becky Moran, Mitchell’s teacher at Trinity, said in a statement.
At the White House, Mitchell saw President Barack Obama and was greeted by First Lady Michelle Obama, who was accompanied by first dog, Bo.
NDP alumna receives athletic honor
In October, Hannah Hartman, a 2012 graduate of Notre Dame Preparatory School in Towson and sophomore lacrosse player at the University of Notre Dame in South Bend, Ind., earned the honor of 2012-13 Big East All-Academic Team.
Loyola University Maryland’s student-run radio station wins national awards
Community programs produced by WLOY, Loyola University Maryland’s student-run radio station, received seven awards Nov. 2 at the 2013 National Student Electronic Media Convention in San Antonio, Texas.
“What Happens Next?”, a children’s program designed to improve imagination, literacy, writing and communication in elementary school students, won the national ‘Best Feature – Radio’ award, according to the Baltimore university. It was also a finalist in the ‘Best Regularly Scheduled Program – Radio’ category.
WLOY’s innovative Word on the Street was the national winner for ‘Best Community Involvement,’ according to the university. Word is a nonprofit newspaper in Baltimore operated by a coalition of volunteers and people who have experienced homelessness.
According to John Devecka, WLOY’s operations manager, the awards serve a dual purpose: recognition and awareness.
“We certainly like the trophies, but our work is for the community, not the recognition,” Devecka said in a statement. “The awards are sometimes what is needed to get people to understand how important the programs are and the impact that Loyola students can have on the community around them. Even though we draw from all over the country, students at WLOY really embrace and love Baltimore. I’m very proud of what they constantly give back and how they seek ways to help others.”
WLOY also received two additional finalist awards for “Both Feet In,” a program that features conversations with people experiencing homelessness, according to the university. The show launched in 2010 and has already won eight national awards.
According to Devecka, “Both Feet In” reduces the stigma and stereotypes associated with homelessness by making invisible people visible and telling their stories.
Since beginning full-time operations in March 2003, WLOY has received local and national awards for its exceptional programming, according to Loyola. The station won a Best of Baltimore award in 2006 for ‘Best Local Music Radio Show’ and has won trophies from the Associated Collegiate Press and National Student Electronic Media Convention host College Broadcasters, Inc.
The station is run by 18 Loyola students who oversee more than 60 DJs.
To read more news and articles on Catholic education, click here.
Also see:
Five priests offer tips for slowing down this Advent season
PrevNext