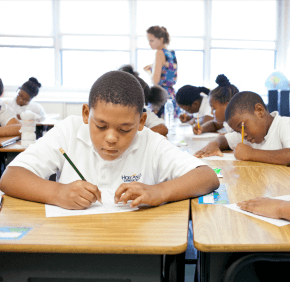 The BOOST program, Broadening Options and Opportunities for Students Today, was funded in the state budget at $5 million for fiscal year 2017.

According to a Dec. 13 press release from the governor’s office, that amount will increase over three years to $10 million by fiscal year 2020.

Although the governor said he will add the money to the state budget, the General Assembly approves the budget and has the power to cut it. Details on how much money Hogan would add to BOOST each fiscal year leading up to 2020 were not immediately available.

“Our administration has made education our number one priority,” Hogan said in the press release, “and we are working hard to ensure that every single child in Maryland is given the chance for a great education, regardless of what neighborhood they happen to grow up in.”

BOOST is aimed at children eligible for free and reduced-price lunches. In the program’s first year, as children were preparing for the 2016-17 school year, the state received approximately 3,000 applications from eligible families.

Some students eligible for reduced-price lunches and already in private school were offered $1,000 scholarships; many such students were put on a waiting list.

The Maryland Catholic Conference, the legislative lobbying arm of the Maryland bishops, applauded Hogan’s move to add funding to the program.

“This is the first step in continuing to address the extensive, proven need for the state’s BOOST scholarship program,” said Garrett O’Day, MCC associate director handling education, children and families. “We’re very grateful for the governor’s dedication to our schools and his willingness to prioritize scholarship assistance for low-income families. He’s following through with a bipartisan promise to propel the work that began a decade ago by (State) Sen. Ed DeGrange and other members of the General Assembly.”

James B. Sellinger, chancellor for education of the Archdiocese of Baltimore, said in August that a total of $1.5 million in BOOST funds were offered to 628 students who wished to attend Catholic schools within the archdiocese, with 38 percent of those students coming from public schools.

Check back for updates on this developing story.